Readers may recall that back in February, listeners to BBC Radio 4’s culture show ‘Front Row’ were inaccurately informed that: 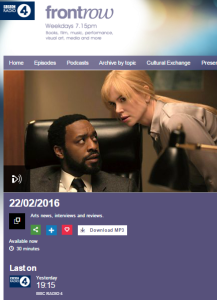 That was not the first – or last – time that BBC audiences had been given inaccurate information concerning that book (see related articles below) and so BBC Watch submitted a complaint on the topic.

The initial response received failed to address the points raised.

“Samira asked AB Yehoshua to comment on his own statement that was reported widely in the media when he referred to a ban of the book by Dorit Rabinyan called Gader Haya, (Borderlife in English). He expressed the opinion that politics and culture need to be separated and that attention needed to be paid to human experiences. He further highlights this is why he made the lead character in his new novel ‘The Extra’ a woman who did not have children, but that his work is always related to politics by others. The focus was on the impact of politics on literature.

That said, we appreciate you feel that more detail could have been given to give context to the comments made by AB Yehoshu [sic] in realtion [sic] to the book.” [emphasis added]

“Thank you for contacting us again regarding Radio 4’s ‘Front Row’ on 22nd February.

We’re sorry to hear you feel our previous response didn’t address your concerns over the availability of the book ‘Border Life’.

We forwarded your concerns to the production team who explained the following:

“This was a discussion that wasn’t specifically about the Rabinyan case – it was about another author’s work and the discussion strayed into political interference in Israeli culture. As such, Samira used the shorthand “banned” in reference to the book. The book was removed from the school syllabus, but in a discussion as wide ranging as this, the point about political involvement in arts and culture still stands whether the book has been banned from society at large, or removed from the school syllabus. The decision to interfere in the distribution of this book was made by, or under pressure from, politicians. That was the point the interviewee was making and to which the presenter responded.”” [emphasis added]

To recap the facts:

The book ‘Borderlife’ was not “banned” in Israel and is freely available to all would-be purchasers in book shops. Neither was it “removed from the school syllabus” – because it was never on it. The decision not to include the book in the curriculum was made by a professional pedagogic body – not “by, or under pressure from, politicians”.

This second-stage response clearly shows that neither BBC Complaints nor the production team of the programme concerned is familiar with the facts behind this story and it is therefore little wonder than the fiction the BBC began promoting at the end of December 2015 has taken on a life of its own.

BBC Watch is of course pursing the matter further.

How many inaccuracies can the BBC cram into a 23 word sentence?