“A surge in the number of executions recorded worldwide saw more people put to death last year than at any point since 1989, Amnesty International says.

At least 1,634 people were executed in 2015, a rise of more than 50% on the previous year, the group found in its review of the use of the death penalty.”

The report included a graphic based on AI’s data. 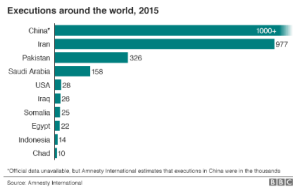 The Telegraph now reports that:

“The Palestinian militant group Hamas is to carry out a string of public executions in the Gaza strip, the patch of territory it controls.

The executions were announced by Hamas’s attorney general in Gaza, Ismail Jaber. “Capital punishments will be implemented soon in Gaza,” he said. “I ask that they take place before a large crowd.”

Thirteen men, most convicted of murder connected to robberies, are currently awaiting execution, another Hamas official, Khalil al-Haya, said on Friday at the main prayers.

If all those go ahead, Gaza’s execution rate relative to the size of its population will overtake that of Saudi Arabia’s in one go.” [emphasis added]

“All execution orders must in theory be approved by PA President Mahmoud Abbas before they can be carried out, but Hamas no longer recognizes his legitimacy.”

As Khaled Abu Toameh has noted in the past, in 2005 Mahmoud Abbas issued a moratorium on death sentences.

Nevertheless, to date the BBC has not found the story of these impending public executions – and the legal questions surrounding them – newsworthy.

Why did the BBC downplay years of Hamas extrajudicial killings?