From the outset, the French government’s announcements concerning its recently held one day conference on the Middle East peace process made it perfectly clear that neither Israeli nor Palestinian representatives would be invited.

“France will host a meeting of ministers from 20 countries on May 30 to try and relaunch the Israel-Palestinian peace process, Foreign Minister Jean-Marc Ayrault announced on Thursday. He told the international press, however, that Israel and the Palestinian officials would not be invited to the meeting, which will take place in Paris.” (Times of Israel & AFP, 21st April 2016)

“France will host a meeting of ministers from 20 countries on May 30 to try to relaunch the Israel-Palestinian peace process, Foreign Minister Jean-Marc Ayrault announced on Thursday.

In an interview with four newspapers including Israel’s Haaretz and pan-Arab daily Al Quds Al-Arabi, the minister said however that Israel and the Palestinians would not be invited to the meeting in Paris.” (France 24, 22nd April 2016)

“Paris plans to host a ministerial meeting of 20 countries, including Egypt, Saudi Arabia and Jordan, as a first step to discuss the peace process which has been effectively frozen since a US-brokered initiative collapsed in April 2014.

However, when Jeremy Bowen reported on that conference to BBC World Service radio listeners in the June 3rd edition of ‘Newshour’ (from 30:07 here) he presented a markedly different picture. 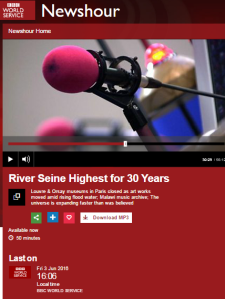 “He’s beset by flooding and strikes at home but President François Hollande has nevertheless taken time to host talks in Paris with the aim of reviving Middle East peace talks. But surprisingly, neither Israel nor the Palestinians are attending. Jeremy Bowen, our Middle East editor, is in Paris; so why aren’t they there?”

Bowen: “Well the Israelis don’t wanna come. They think that having an international meeting like this is completely the wrong way to proceed. They say there should be one-on-one negotiations between the two leaders of the Palestinians and of the Israelis. Ah…the Palestinians welcomed the conference but I think the fact that the Israelis aren’t coming meant that they decided to go ahead without either of them.”

In other words Bowen promoted two falsehoods in those four sentences: rather than telling listeners that Israel and the Palestinians were not invited to the meeting, he falsely attributed Israel’s absence to a refusal to attend and then ‘explained’ Palestinian non-participation by means of the myth he has created.

Later on Bowen – who has been the gatekeeper of information provided to BBC audiences on the topic of this conference – once again promoted the notion that the Palestinian-Israeli conflict is the lynchpin of strife in the Middle East and beyond.

“What this is about is trying to get the international community to talk again about the need to have peace between the Israelis and Palestinians because it’s really rather slipped off the agenda in the last few years. There’s no peace process whatsoever and it’s been somewhat eclipsed – their own conflict has been somewhat eclipsed – by the tumult and war and chaos elsewhere in the Middle East.”

“Ah…what President Hollande, the French president, said today was that just because there are dramatic things happening elsewhere in the region, it is no reason to ignore the real dangers of the conflict between the Israelis and the Palestinians. And he also said that at a time – as he put it – when terrorism was spreading everywhere in the world, then people are…I think essentially he was saying that people, outsiders, had a legitimate interest in what was happening there and in trying to settle it because his belief would be that’s one of the drivers for the violence that is spreading.”

Regardless of whether or not Bowen’s paraphrasing of the French president’s “belief” is accurate, it is noticeable that he made no attempt to relieve listeners of the mistaken impression that a prime cause of terrorism in France, Belgium, Turkey, Syria or elsewhere is the Palestinian-Israeli conflict.

He then went on to promote a theme increasingly seen in BBC content:

“What the French foreign minister said in his closing remarks was that that idea of two state solution is in great danger – he said because of the colonization of the occupied territories by the Israelis; the fact that settlements have been growing apace.”

Apace of course means swiftly or quickly and that is the term Jeremy Bowen apparently thinks is an accurate description of fewer than fourteen hundred completed construction projects annually in existing communities throughout the whole of Judea & Samaria in the three years between 2013 and 2015 inclusive. Neither of course did he bother to advise listeners of the fact that the existing agreements between Israel and the Palestinians – the Oslo Accords – place no limitations whatsoever on construction in Area C or Jerusalem.

Bowen closed his report with some by now standard promotion of PLO talking points.

“Now the Israelis say that the problem is the fact that there is incitement against them; that Palestinians are brainwashed into hating them. The Palestinians essentially say that their people – after getting on for 50 years of occupation – are at their wits’ end, at the end of their tether and if violence happens, that’s the reason: because of those frustrations and anger and humiliation.”

An additional report by Bowen on the topic of the Paris conference will be discussed in a subsequent post.