We have noted many times before on these pages that whilst the BBC often provides a platform for proponents of BDS – Boycott, Divestment and Sanctions – against Israel (and no less frequently some of its own journalists can also be found amplifying and mainstreaming that campaign), the corporation consistently fails to provide its audiences with the full facts about the aims and motivations of BDS.

Hence, when the BBC World Service radio programme ‘Business Matters’ got the BDS campaign’s high priest Omar Barghouti on the line for an interview on June 2nd, one might have thought that presenter Roger Hearing would have made the most of that opportunity to finally enhance BBC audiences’ understanding of what that campaign is really all about. 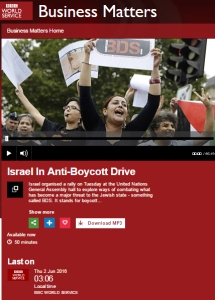 Hearing’s introduction to the item (from 01:06 here) focused on an event which had taken place in New York a couple of days previously.

“Now the session inside the United Nations General Assembly hall on Tuesday was loud and passionate but it wasn’t diplomats. More than a thousand Jewish students plus representation of businesses and academics; all there at a rally organized by Israel to explore ways of combatting what’s become a major threat to the Jewish state – something called BDS. It stands for boycott, disinvestment [sic] and sanctions and it’s an international campaign that targets universities and businesses with links to Israel. Danny Danon, Israel’s UN representative, didn’t hold back on how big a threat he thinks BDS is.”

Recording of Danon: “This is a movement that incites against the Jewish state, a movement whose leaders openly call for the elimination of Israel. BDS is not about helping Palestinians or bringing peace. Their only goal is to bring an end to the Jewish state. This is a reality and we won’t be afraid to say it out loud, everywhere. BDS is the true face of modern antisemitism.”

Hearing continued with some examples of BDS’ supposed success:

“And the threat is clear. It’s already cost Israel millions of dollars. The mobile company Orange cut off relations with its local provider in Israel last year which many attributed to BDS pressure.”

In fact Orange’s parting of ways with its former brand licensee Partner Communications cost it – rather than “Israel”, as claimed by Hearing – millions of dollars.

The new agreement stipulates that Orange will pay up to €90 million to Partner, a sizeable chunk of which will be used to help Partner rebrand itself in the wake of Orange’s departure.”

Orange’s CEO (who of course is likely better informed than the “many” cited by Hearing) dismissed claims that BDS had influenced his company’s strategy and Orange continues to have business interests in Israel.

“Veolia – a French energy services and transportation company which built the Jerusalem light railway – said it was stepping back from the Israeli marketplace after some banks and investors put pressure on them.”

Veolia actually said nothing of the sort.

“…groups supporting the Boycotts, Divestment and Sanctions (BDS) movement claimed that the transportation firm Veolia’s parent company, Transdev, sold their bus operations in Israel as a result of BDS pressure. While it is true that Transdev sold their stake, the sale is merely part of a global strategy of consolidation that is spelled out quite clearly on their website. It was not due to any other factors, and certainly not because of the use of BDS tactics.

In fact, Transdev’s Group Communication Director, Bruno Negro, came forth to publicly confirm this fact stating, in an email to IAN, “In August of 2013, Transdev sold its entire bus operation in Israel to an Israeli bus company. The sale is final and has been approved by the Israeli Transportation Ministry. The sale was in the works for some time as part of Transdev’s global strategy to consolidate operations, decrease debt, and fund further growth in the U.S. and other selected countries. It was not due to any additional factors, political or otherwise.””

Hearing went on with his list of BDS ‘victories’:

“SodaStream pulled its factories out of the West Bank after a boycott campaign.”

The CEO of SodaStream was among those attending the UNGA event described by Hearing in his introduction and – as has been the case in the past – he told a different story.

“Among them was SodaStream CEO Daniel Birnbaum, whose West Bank factory in Maale Adumim, which employed Palestinians alongside Israelis, long was a target of the BDS movement. When SodaStream shuttered the factory in 2013 to consolidate its operations at a larger, newly constructed facility in the Israeli city of Beersheba, the move was falsely cited as a victory for the BDS movement. In fact, it was to accommodate the company’s rapid growth, Birnbaum said.”

Ironically, on the same day that Roger Hearing tried to persuade his listeners that BDS is having financial and commercial effects upon Israel using those three fallacious examples, it was revealed that foreign investment in Israel has risen three-fold since the BDS campaign began.

Hearing then went on to conduct his interview with Omar Barghouti. Did listeners get a clear and factual picture of the BDS campaign’s end game? That question will be examined in part two of this post.