After some five years at the BBC’s Jerusalem bureau, Kevin Connolly is moving on to take up a new post in Brussels – but not before making a final contribution to the mission he describes thus:

“I came here just to play the smallest of parts in writing one chapter of Jerusalem’s story”.

As those who have followed Connolly’s work over the past few years will be aware, it has not infrequently included subtle (and not so subtle) re-writing of past and present chapters of “Jerusalem’s story” and his concluding musings on the June 16th edition of BBC Radio 4’s ‘From Our Own Correspondent’ (from 16:27 here) are no exception. 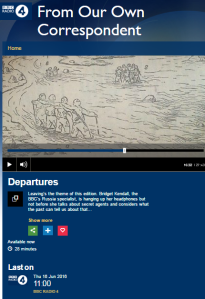 For example, Connolly uses the ambiguous term “line of demarcation” which implies far more permanency than was intended by those who drafted the 1949 Armistice agreement which produced the ceasefire line he is actually describing.

“A stone’s throw from the house lies the line of demarcation which separated the armies of the Arab world from the forces of the newly independent Jewish state back in 1949.”

In Connolly’s account, no belligerent invasion or occupation by the British-backed Jordanian army is evident.

“When the fighting ended in 1949 Jerusalem was grudgingly divided between Israel and the neighbouring Arab Kingdom of Jordan.”

Only one population suffered “dispossession and disinheritance” according to Connolly: the ethnic cleansing of the Old City of Jerusalem has apparently not come to his attention in the past five years.

“Many Zionists were filled with despair. What was the point of this long dreamed of Jewish state if it didn’t contain the place of prayer at the Western Wall or the ancient cemetery on the Mount of Olives? It was a time of bitterness and loss too for many of the Arabs of West Jerusalem and beyond who fled their homes never to return, beginning a story of dispossession and disinheritance that still has no ending.”

While refraining from mentioning the 19-year Jordanian occupation of parts of Jerusalem, he does later find a use for that term:

“The war of 1967 left Israel in control of East Jerusalem, binding together the fractured fragments of Jewish hearts if you’re a Zionist, beginning 49 years of military occupation if you’re not.”

And Connolly even invents a Jordanian “claim” – and a dubious consensus – on belligerently occupied territory which the international community refused to recognise as Jordanian.

“The Palestinians who inherited the Jordanian claim on the east of the city believe it will be the future capital of their independent state and that is what the wider world wants too.”

Not for the first time, Connolly misleads listeners with regard to British history in the region, inaccurately suggesting that Mandate Palestine was a British colony.

As we already know, Kevin Connolly thinks those who take issue with inaccuracy and omission in his and his colleagues’ reporting are driven by the wish to promote a “narrative” and his post-factual theory is again amplified in his parting shot.

“Supporters of the Palestinians and of Israel scrutinise everything that’s written about the city, alert for any terminological hint of bias or ignorance or both. Each side has its own lexicon and watches suspiciously for any hint that the news has been written in the words of the other. Is a young Palestinian who stabs an Israeli soldier a terrorist? Or a normal teenager goaded beyond endurance by generations of humiliation? Is an Israeli soldier who shoots a wounded and helpless Palestinian in such an incident a murderer or a young man defending his comrades and his country when they are under attack? There are no answers of course, beyond the answers you favour yourself. Reporting Jerusalem means finding words that convey what has happened and why – but also remembering that neither side recognises the truth of the other. The scrutiny is a legacy of the sense built up over centuries of how the unsettled future of this place matters to millions of people who have never seen it. These words aren’t exempt from that process either; ad nauseam maybe.”

Obviously Mr Connolly finds any examination of his five years of attempts to dictate “one chapter of Jerusalem’s story” tiresome and annoying and so he may be relieved to be moving on to pastures new. Given that the BBC does not refuse to respect the Belgian people’s choice of their own capital as it does in Jerusalem, we might perhaps expect to find Connolly less frequently engaged in negating the Belgian nation’s sovereignty over the City of Brussels.

“Jerusalem in general feels like it belongs to the world…”

There are of course many of us who are not going anywhere and for whom the way in which the “story” of Jerusalem and Israel is told by brief sojourners such as Kevin Connolly has very real consequences. We remain charged with the task of trying to make certain that the “historical record” promoted by the world’s biggest and most influential broadcaster is both accurate and impartial in order to ensure that public opinion and foreign policymakers who take it upon themselves to intervene in that story are informed by facts rather than politicised journalistic activism.

And if Mr Connolly finds that tiresome, that perhaps says all that needs to be said about the motivations behind his wish to write – rather than observe and record – the story of the city and the country which hosted him for the last five years.

Like Loading...
Tags from the story
Accuracy, BBC, BBC Jerusalem Bureau, BBC Radio 4, From our own Correspondent, Impartiality, Israel, Jerusalem, Kevin Connolly, Omission, Public Purposes
Written By
Hadar Sela
More from Hadar Sela
h/t IM Back in April we noted yet another example of the...
Read More