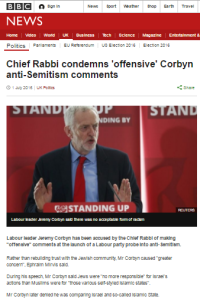 The comments in question were made by Jeremy Corbyn at the launch of the report compiled by Shami Chakrabarti following her inquiry into the issue of antisemitism within the UK Labour Party. The BBC’s article noted the responses of the Chief Rabbi and his predecessor whilst also describing an incident which took place at the launch and summarising the report’s content.

Towards the end of the BBC’s article readers found re-amplification of themes previously seen in BBC reporting on the issue of the antisemitism scandals which engulfed the Labour party earlier in the year.

Having already been informed that the inquiry was initiated following the suspension of Naz Shah MP and Ken Livingstone, readers were told that:

“Ms Shah, the MP for Bradford West, was suspended after social media posts emerged in which she suggested Israel should be moved to the United States.”

That anodyne depiction of Shah’s Facebook post of course conceals from audiences the fact that what the MP was actually advocating was the ethnic cleansing of Jews from the Middle East. BBC audiences saw that same whitewashed portrayal in a would-be backgrounder titled “What’s the difference between anti-Semitism and anti-Zionism?” which appeared on the BBC News website on April 29th and which also appears as a link at the bottom of this latest article.

At the end of this article readers found an insert titled “Anti-Semitism and Zionism” in which the BBC informed them that:

“Zionism refers to the movement to create a Jewish state in the Middle East, corresponding to the historic land of Israel – anti-Zionism opposes that”.

Readers were then told that:

“Some say “Zionist” can be used as a coded attack on Jews, while others say the Israeli government and its supporters are deliberately confusing anti-Zionism with anti-Semitism to avoid criticism.”

In other words, once again (see ‘related articles’ below) the BBC has elected to amplify and mainstream the Livingstone Formulation.

Despite its own dismal record and the plethora of evidence showing that the BBC does not have the authority or the expertise – let alone the remit – to define antisemitism, it continues to co-opt itself to that role. The result is the kind of ‘blind reporting on the blind’ seen in this article and that clearly does not serve the interests of the corporation’s funding public as audience understanding of the issue of antisemitism within the Labour Party – and in general – continues to be compromised.

BBC News tries – and fails – to explain antisemitism and anti-Zionism