“Also on Thursday, a senior United Nations official cited a long-awaited report by the Middle East Quartet as saying that hopes for peace between Israel and the Palestinians were being severely undermined by three “negative trends”.

Nickolay Mladenov told the UN Security Council that they were continuing violence, terrorism and incitement; Israeli settlement expansion in the West Bank; and a lack of control of the Gaza Strip by the Palestinian Authority.”

As noted here previously, in its July 1st article relating to that report from the Quartet the BBC herded audiences’ attentions towards one of those three “negative trends” in particular by devoting 282 words to the topic of “settlement expansion”, 213 words to the subject of “violence, terrorism and incitement” and a mere 91 words to issues related to the PA’s “lack of control of the Gaza Strip” whilst completely ignoring the Quartet’s concerns about weapons smuggling, cross border tunnels and terrorism.

In case audiences had not quite got the message, an additional article by Yolande Knell appeared on the BBC News website’s Middle East page on July 1st with some very clear signposting seen in its promotion. 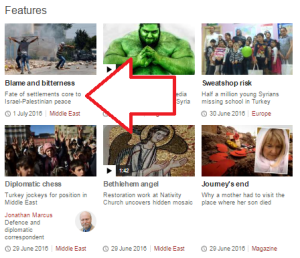 Titled “Israel-Palestinians: Blame and bitterness keeping peace at bay“, the article’s opening paragraphs include some equally overt signposting.

“For retired West Bank farmer Issa Hamed, the idea that Jewish settlements are destroying a two-state solution to the Israel-Palestinian conflict is a no-brainer.

From the rooftop of his home in Silwad, north-east of Ramallah, the sprightly 86-year-old points to the red roofs of the settlement of Ofra, set up in 1975.

“At first, they took just one dunam (1000 sq m), where there used to be a Jordanian military camp, then they kept expanding and blocked access for the landowners,” Mr Hamed recalls.

“It became like a cancer growing quickly over the hills.”” [emphasis added]

Knell’s article contains many of the usual features of any BBC report relating to the topic of construction in Israeli communities in Judea & Samaria and parts of Jerusalem. As far as Knell is concerned, history begins in June 1967: she makes no effort to inform audiences of the legal status of Judea & Samaria, Jerusalem and the Gaza Strip before they were attacked and occupied in 1948.

“Settlement construction began after Israel defeated Arab armies in the 1967 Middle East war. It captured the West Bank, including East Jerusalem, from Jordan and Gaza from Egypt.”

Moreover, while failing to inform her readers about San Remo and the Mandate for Palestine, Knell does find it necessary introduce the subject of religion – but refrains from mentioning the no less relevant topic of Hamas’ approach to ‘Islamic lands’.

“Some Israelis choose to live in settlements for lifestyle reasons but others are religious nationalists.

They believe God gave the land of Israel to the Jewish people – including Jerusalem and the West Bank, which they call Judea and Samaria.”

Readers see the inevitable BBC mantra on ‘international law’ which fails to inform audiences of legal opinions which do not conform to the corporation’s chosen narrative.

“Since the 1970s, left- and right wing governments have encouraged Israelis to move to settlements. There are now at least 570,000 settlers.

Under international law, their presence is seen as illegal, but Israel disagrees. Officials have argued they are built on “disputed”, not “occupied” territory.”

The 1949 Armistice lines – specifically designed not to be permanent boundaries or borders – are misleadingly presented as such.

Knell promotes and amplifies the topic of the BDS campaign in her article but, as is inevitably the case in BBC content, fails to inform readers what that campaign aims to achieve: the dissolution of the Jewish state.

“They [Israeli officials] have already fought against EU moves to label settlement products and a civil society campaign of boycott, divestment and sanctions (BDS).

“The vast majority of international parties have refrained so far from any serious pressure on Israel,” says Palestinian politician, Mustafa Barghouti, who supports BDS.

“It’s not enough to condemn settlements and say they block peace.”

Palestinians plan to renew their calls for further sanctions, including a ban on products from settlements and companies that invest or work in them.”

Among the links to additional related material promoted to readers of this article is one presented as “The settlement issue”. That link leads to a highly partisan article originally published nine years ago which has already been discussed here.

Beyond her grandstanding of the ‘settlements are to blame’ theme, Knell does little to enhance audience understanding of the issue. After quoting a spokesman from the Yesha Council, she writes:

“It points to the fact that Israel’s 2005 pullout from Gaza, with the removal of 8,500 settlers, only led to further conflicts.”

Obviously Knell did not consider it useful to her case to discuss that topic further or to try to use that experience to enhance audience understanding of the potential scenarios in Judea & Samaria. Later on, under the sub-heading “What if?”, she makes a brief mention of a topic usually ignored by the BBC.

“If a peace deal was reached, it is generally accepted that many settlements would remain. Past negotiations are understood to have included mutually agreed land-swaps in which Israel would keep its major settlement blocs.”

She then goes on to say:

“However, it is estimated these could leave over 100,000 settlers in the West Bank.”

Knell does not clarify why she apparently thinks that would be an issue and again chooses not to discuss the fact that the evacuation of Israelis from their homes in the Gaza Strip did not prove conducive to ending the conflict.

“Quartet members – the US, EU, UN and Russia – also identify Palestinian violence and incitement and the political situation in Gaza as obstacles to peace.

The Israeli government believes that these are the factors that should be highlighted.

In recent days there has been a series of attacks. An American-Israeli girl was stabbed to death in a settlement near Hebron and an Israeli car in the West Bank was shot, causing it to crash, killing the driver and injuring three passengers.”

Once again we see that the Palestinian Authority’s incitement and glorification of terrorism, together with Hamas’ terrorism, tunnel building, its weapons smuggling and production and its violent rivalry with the PA – all of which are noted in the Quartet’s report – are airbrushed out of an article obviously intended to herd BBC audiences towards one specific view of what – and who – is “destroying a two-state solution to the Israel-Palestinian conflict”.

While completely consistent with Yolande Knell’s record, this of course is the type of editorialised advocacy journalism which flies in the face of the BBC’s claim to provide its audiences with ‘impartial’ reporting.