As readers may be aware, on July 4th the Israeli prime minister embarked on an official visit to four countries in Africa. 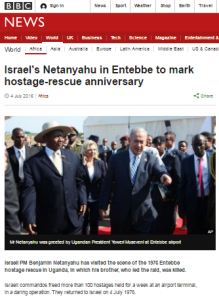 The BBC News website’s Middle East page published two articles on that topic: “Israel’s Netanyahu in Entebbe to mark hostage-rescue anniversary” and, in the ‘Features’ section, “Netanyahu in Entebbe: A personal journey amid a diplomatic push” by defence and diplomatic correspondent Jonathan Marcus.

Both those reports include features made no less noteworthy by their predictability.

In Marcus’ article readers found context-free amplification of the narrative of ‘occupation’.

“A whole combination of factors prompted a souring of ties between Israel and African capitals between 1966 and 1973.

There was Israel’s occupation of territory captured in the 1967 Six Day War. There was growing pressure from Arab states and, by the Middle East War in 1973, the oil weapon was a potent tool.”

In the other article terrorists were described as “militants”.

“His [Netanyahu’s] elder brother, Jonathan, was shot dead as he led the operation to free hostages, who had been taken captive on an Air France flight by Palestinian and German militants.”

Uncritical amplification was given to the false narrative of “colonialism” in a superfluous quote from a party unconnected to the story.

African states would see through Netanyahu’s “propaganda” because Africans and the Palestinians shared a history of “occupations and colonialism”, he told AP news agency.”

But perhaps most remarkable is the fact that among the related reading promoted in both these articles is a link titled “Israel’s unwanted African migrants”.

The article to which the link leads has nothing at all to do with the subject of Netanyahu’s current visit to Africa and yet the BBC opportunistically recycled that highly problematic report (one of several produced by Kathy Harcombe in February 2016) which is nothing more than a self-conscripted contribution to the PR efforts of a campaign run by a coalition of political NGOs and certainly does not provide readers with accurate and impartial information likely to enhance their understanding of either that unrelated issue or the subject matter of these two reports.

Somebody at the BBC News website made the editorial decision to include that link in both of its articles covering the Israeli PM’s visit to Africa and that person apparently believes that enhances the corporation’s reputation for ‘impartial’ journalism.