A BBC correspondent usually based in Mexico City is currently visiting Israel and on July 12th produced two reports – one written and one filmed – relating to the tenth anniversary of the Second Lebanon War.

In her filmed report titled “On patrol with the Israel Defense Forces on Lebanon border” Katy Watson gave viewers a rare view of Hizballah’s use of the residents of southern Lebanon as human shields.

“The soldiers tell me they can see weapons being stored in areas where civilians live.”

That important and usually overlooked information was also available to readers of her written report titled “Israel ‘readier’ for new Hezbollah war“.

“In these stakeouts, troops keep an eye on Hezbollah operatives around the clock. From what they see, the weapons Hezbollah has are being stored in civilian areas.

“Every mission that I’ve been on personally has been observing Hezbollah operations in a heavily populated area,” says one of the soldiers, Gabriel. “In a house with a family living in it or in a house next door or behind it.”

Israel has long said that it will target places where the weapons are stashed. It warns if war breaks out, Lebanese casualties would be high.”

Both reports also include information about Hizballah’s rehabilitation of its missile arsenal since the 2006 war. 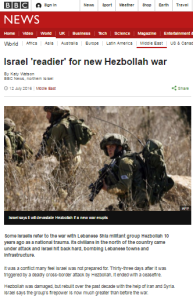 “Hezbollah was damaged, but rebuilt over the past decade with the help of Iran and Syria. Israel says the group’s firepower is now much greater than before the war.

“Now they have more than 120,000 rockets and missiles,” says General Yaakov Amidror, a former national security advisor, now with the Begin-Sadat Centre for Strategic Studies at Bar-Ilan University near Tel Aviv.

“It’s a huge number that you don’t find in any country in Europe for example. When you see all these efforts, you ask yourself one question – what for?””

While more could have been done to provide audiences with information concerning Iran’s provision of funding and weapons to Hizballah and neither report addresses the fact that Hizballah’s weapons stockpiles are a violation of UNSC resolution 1701 that ended the 2006 war and a clear indication of the impotence of the UNIFIL forces in southern Lebanon, these two reports by Katy Watson are nevertheless a refreshing change in the landscape of BBC Israel-related reporting.

It is not every day that we come across a BBC journalist who is content with telling a story rather than telling audiences what to think about a story.