Kate Adie’s introduction to an item about rock-climbing which was broadcast in the July 16th edition of BBC Radio 4’s ‘From Our Own Correspondent’ (from 17:09 here) sounded promising. 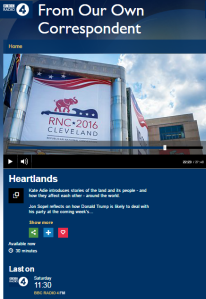 “In sixty years this programme has broadcast many dispatches from the Middle East – particularly the West Bank. They’re often about religion or politics and all too often about violence. Many journalists have written about the scene in Ramallah; just six miles from Jerusalem. But Ed Lewis has found something different: a sports centre that’s opening up new horizons.”

So was that item about a Palestinian rock-climbing club really “something different” and did it indeed manage to avoid politics? Not quite.

Tourism consultant and freelance journalist Edward Lewis managed to get a gratuitous, context-free mention of Israel’s anti-terrorist fence into his introduction – but without of course informing listeners why the construction of that fence (only a small percentage of which is actually “wall”) was necessary.

“Ramallah has a new wall. Not a vertical grey concrete wall but a bright blue, green and white one. It has no look-out posts, razor wire or steel gates. Instead there are bungee ropes, crash mats and colour. Far from emitting a message to stay away, this wall is encouraging Palestinians to approach and explore.”

The context of Palestinian terrorism was also erased from later remarks made by Lewis, as were the Oslo Accords arrangements which divide the region into Areas A, B and C.

“Despite the challenges of mobility in the West Bank…”

“In the wake of a rash of violent incidents since October 2015, tension with Israel has risen and it has become harder for single Palestinian men to get work permits in East Jerusalem.”

“The West Bank has not become an adventure playground overnight – nor will it anytime soon. Israeli restrictions and the designation of many parts of the West Bank as military zones or nature reserves severely restrict the scope for more outdoor activity.”

Could Lewis have reported on that climbing club in Ramallah without the insertion of that unnecessary and context-free mention of the anti-terrorist fence which contributed nothing to his report? Of course he could. But as we all too often see, even the most seemingly benign subject matter can be opportunistically used by self-conscripted journalists to casually reinforce an adopted narrative.