“Confusion over the role of the press explains one of the strangest aspects of coverage here—namely, that while international organizations are among the most powerful actors in the Israel story, they are almost never reported on. Are they bloated, ineffective, or corrupt? Are they helping, or hurting? We don’t know, because these groups are to be quoted, not covered.” [Matti Friedman, “What the Media Gets Wrong About Israel“, November 2014] 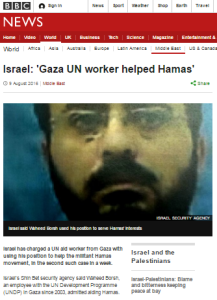 “Israel has charged a UN aid worker from Gaza with using his position to help the militant Hamas movement, in the second such case in a week.”

When the BBC reported on that previous case, it took seven paragraphs before audiences were provided with the obviously very relevant information that Hamas is a proscribed terror organisation. In this article, readers have to plough through its entire seventeen paragraphs before they are informed that:

“Hamas is designated a terrorist group by Israel, the US, EU, and UK among other countries.”

It said he used UN resources to build a military jetty and prioritised rebuilding homes of Hamas members.”

The BBC’s use of the economical terminology “military jetty” does not of course tell the full story about that project.

“Bursh is an employee of the United Nations Development Program (UNDP), which undertakes such projects as rehabilitating Gaza Strip homes damaged in warfare.

He has worked as a UNDP engineer since 2003 and was tasked with overseeing the demolition of homes and evacuating the waste.

According to the Shin Bet, Bursh was approached shortly after the 2014 Gaza war by Husseini Suleiman, a messenger for senior Hamas commander Abu Anas al-Andor, who asked him to use his position to help the terrorist organization. In April and May 2015, he allegedly helped build the naval commando port in the northern Gaza Strip.

Bursh is said to have used his authority to transfer to the site 300 tons of construction materials.”

Later on readers are told that:

“It [the ISA] said he [Borsh] had been instructed by Hamas to ensure UNDP projects would benefit the militant group. The ISA said Mr Borsh confessed to carrying out activities that aided Hamas.

This included informing the group when weapons or tunnel openings were found in houses where UNDP workers were operating, it said.

As a result “Hamas would take control of the site and confiscate the arms and other materials,” the ISA said.”

The BBC omits a vital piece of information from that portrayal.

“Additionally, Borsh disclosed information regarding cases in which Hamas would blatantly and aggressively exploit UNDP humanitarian activities for its own purposes. For example, when weapons or terrorist tunnel openings were discovered in houses being handled by the UNDP, Hamas would take control of the site and confiscate the arms and other materials. This violates clear UN procedures according to which UNMAS is supposed to be immediately notified as the United Nations Mine Action Service is the UN body in charge of dealing, inter alia, with explosive remnants of war.” [emphasis added]

The article promotes an unqualified quote from the terrorist organisation concerned.

“Hamas said the allegations were “incorrect and baseless” and part of Israeli efforts “to tighten the siege of the Gaza Strip by prosecuting international relief organisations”.”

However, the statement was not attributed to the person who made it – Sami Abu Zuhri – and the threat included in his statement was edited out.

“Hamas, meanwhile, denied the allegations in an official statement. The group’s spokesperson Sami Abu Zurhi called the accusations “false and baseless,” and said they were aimed at helping Israel strengthen its “siege” of Gaza.

If Israel persists in its policy of accusing aid organizations in Gaza, it would face “dangerous consequences,” Zurhi said.”

As regular readers know, the BBC has in the past frequently and enthusiastically promoted UN politicised messaging on the topic of reconstruction in the Gaza Strip while concurrently ignoring the flaws in the UN’s system. Obviously it is high time for the BBC to meet its public purpose remit by finally providing audiences with some in-depth and objective coverage of the various UN agencies (and additional humanitarian organisations) working in the Gaza Strip.