On August 12th 2006 the BBC News website reported that:

“The UN Security Council has unanimously approved a new resolution calling for a ceasefire between Israel and Hezbollah.

Resolution 1701 calls for “a full cessation of hostilities”, and UN and Lebanese troops to replace Israeli forces in southern Lebanon.”

BBC audiences were also provided with the text of that UNSC resolution which of course includes the following: 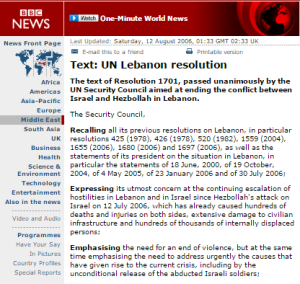 The resolution calls for:

The same resolution expanded the mandate and capabilities of the UNIFIL force in southern Lebanon and charged it, inter alia, with aiding the Lebanese government to prevent Hizballah’s rearmament.

While that UNSC resolution brought an end to the 2006 war, it has obviously failed to achieve its long-term goal of avoiding the next round of conflict by preventing Hizballah’s rearmament and entrenchment in southern Lebanon.

The BBC’s public purpose remit commits it to keeping its funding public “in touch with what is going on in the world” and to building “a global understanding of international issues” and so it would be reasonable to assume that audiences have been kept up to date on the issues pertaining to implementation of Resolution 1701 throughout the decade since it was adopted – but is that the case?

The ‘timeline’ in the BBC’s online profile of Lebanon (last updated in August 2016) makes no mention at all of the existence of UNSC Resolution 1701.

The profile itself includes a generalised reference to the disarming of militias without specifically recalling Resolution 1701 and without clarifying the current status of that ‘demand’.

“The UN has demanded the dismantling of all armed groups in Lebanon, including Palestinian militias and the military wing of Hezbollah, which controls much of southern Lebanon.”

The BBC’s current profile of Hizballah (last updated in March 2016) tells audiences that:

“After Israel withdrew in 2000, Hezbollah resisted pressure to disarm and continued to strengthen its military wing, the Islamic Resistance. In some ways, its capabilities now exceed those of the Lebanese army, its considerable firepower used against Israel in the 2006 war.”

“Hezbollah survived the [2006] war and emerged emboldened. Although it is has since upgraded and expanded its arsenal and recruited scores of new fighters, there has been no major flare-up along the border area, which is now patrolled by UN peacekeepers and the Lebanese army.”

No mention is made of Resolution 1701 and the obligation to disarm the terrorist organisation, prevent its rearmament and remove it from southern Lebanon in either of those profiles currently appearing on the BBC News website.

Immediately after the 2006 war, the BBC was able to tell its audiences that:

Nearly a year after the adoption of Resolution 1701, the BBC sent Martin Asser to southern Lebanon to ‘examine UNIFIL’s performance’. The caption to the main photograph illustrating his article informed audiences that “Unifil troops are meant to prevent Hezbollah bearing arms”. 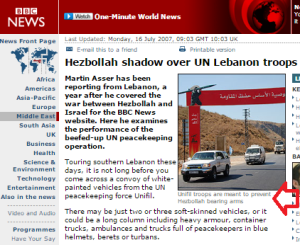 “After the July 2006 war, the [UNIFIL] force received new orders and thousands of reinforcements under the ceasefire resolution 1701, which also stipulated the deployment of the Lebanese army in the area.

Previously the area had become the fiefdom of Hezbollah, the Shia Islamist and militant movement whose cross-border raid on 12 July – snatching two Israeli soldiers – was the catalyst for the 34-day conflict.

The post-conflict objective was for Unifil to help the Lebanese government extend its sovereignty to the southern frontier, so Hezbollah’s armed wing would no longer be free to menace nearby Israeli towns or troops patrolling the border.”

“Hezbollah fighters are masters of concealment and guerrilla warfare – their weapons were never on show before the war, so they are unlikely to be caught red-handed by Unifil or Lebanese troops now.”

An old profile of Hizballah from 2010 states:

“Despite two UN resolutions (1559 passed in 2004, and 1701, which halted the war) calling for disarming of militias in Lebanon, Hezbollah’s military arm remains intact.”

In 2013 BBC audiences were told by the corporation’s man in Beirut, Jim Muir, that “Hezbollah has scrupulously observed the ceasefire that ended hostilities in 2006”. In 2015 Orla Guerin reported from south Lebanon but failed to use the opportunity provided by a rare BBC visit to that area to inform audiences of Hizballah’s use of civilian villages to store weapons and as sites from which to launch attacks against Israel.

The BBC has also consistently avoided or downplayed the topic of Iranian breaches of UNSC Resolution 1701 in the form of its transfer of arms to Hizballah. In 2013 BBC audiences heard Middle East editor Jeremy Bowen playing dumb (and some Hizballah spin) on the issue of Syrian transfers of weapons to the terrorist organisation.

Already in 2007 – just over a year after the war and the resolution which brought it to an end – the UN admitted that Hizballah had “rebuilt and even increased its military capacity” and since then its weapons stocks have vastly increased and diversified. The BBC is of course aware of that fact – as indicated in an article by BBC Monitoring’s Lamia Estatie published on July 11th 2016 under the headline “Hezbollah: Five ways group has changed since 2006 Israel war“.

No mention of UNSC Resolution 1701 appears in that report either.

It is apparent that as the decade since the UNSC’s adoption of 1701 progressed, BBC audiences saw less coverage of the topic of the existence of the resolution itself and the fact that its terms have been serially violated. Given the obligations to its funding public laid out in the public purposes remit, it is difficult to see how the BBC can justify that pattern of reporting.