Like many other UK media organisations, the BBC produced considerable coverage of the story of the conviction of British Islamist extremist Anjem Choudary which broke on August 16th.

BBC audiences heard reports on Radio 4’s ‘Six O’Clock News‘, ‘The World Tonight‘ and ‘PM‘. Listeners to the BBC World Service heard a report on ‘Newshour‘. Television audiences also saw reports on the story – for example here and here. Visitors to the BBC News website found reports on its UK page – for example here and here – and an article by the BBC’s home affairs correspondent titled “How Anjem Choudary’s mouth was finally shut” appeared in its magazine section. 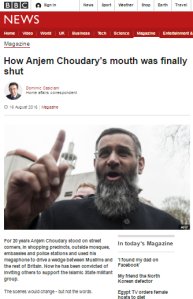 As is the case in some of the other reports, in that article Dominic Casciani referred to Choudary’s relationship with members of the media.

“He would greet the journalists with a smile, and some guile, dressed up as charm.

One day outside Regent’s Park Mosque (he was banned from ranting inside its premises) he told the crowd he was honoured that I had turned up to hear him speak. He liked playing games. It gave him a sense that he was winning.” […]

“Choudary loved the limelight and revelled in media attention.” […]

“He [Choudary] tried in vain to get the Supreme Court to stop the prosecution. He asked some journalists if they would act as character witnesses (I wasn’t one of them).”

“And in Britain he’s been a fairly ubiquitous sort of figure. This is not someone – for listeners around the world – this is not someone who’s only reached…ehm…supporters via Youtube or via other social media. He’s been on mainstream news programmes quite regularly, hasn’t he?”

But in none of the above reports did BBC journalists acknowledge that their own corporation repeatedly provided Choudary with a platform. Following an interview with Choudary on the BBC Radio 4 ‘Today’ programme in December 2013 in which he controversially refused to condemn the murder of British soldier Lee Rigby, we noted here that:

“Of course there can be no doubt that the BBC editors who decided to interview Choudary for that programme knew in advance exactly what kind of responses they were going to get from him. After all, like the proprietors of some Victorian freak-show seeking to attract audiences by way of the ‘shock factor’, the BBC has been wheeling out Choudary and his template propaganda for over a decade, including a ‘Hardtalk’ interview from 2003 in which he refused to condemn the Mike’s Place suicide bombers, another ‘Hardtalk’ interview from 2005 in which he likewise refused to condemn the London terror attacks, participation in ‘The Big Questions’ and ‘Newsnight’ and an appearance on ‘Newsnight’ in May 2013 (also promoted on the BBC News website) in which his stance on the brutal murder of Lee Rigby was made amply clear.

Beyond his tawdry ‘shock factor’ which is exploited to the full by the BBC, Anjem Choudary does not represent one of those “significant stands of thought” which the BBC’s Editorial Guidelines pledge to reflect and represent. His bigoted rants and apologist attitude to terrorism reflect the views of no more than a minuscule proportion of British citizens and such views certainly are not embraced by the vast majority of people who share his faith. And yet, following the latest round of criticism in December, the BBC felt the need to defend its amplification of the abhorrent views of an anti-democratic supremacist.

“A BBC spokeswoman said: “We have given great consideration to our reporting of the Woolwich murder and the subsequent trial, and carried a wide range of views from across the political and religious spectrums.

“We have a responsibility to both report on the story and try to shed light on why it happened. We believe it is important to reflect the fact that such opinions exist and feel that Choudary’s comments may offer some insight into how this crime came about.” 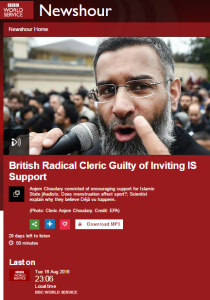 In both the ‘Newshour’ report and in his written article, Dominic Casciani describes Choudary as having “used his megaphone to drive a wedge between Muslims and the rest of Britain”. If the BBC now recognises that, one must of course ponder the question of why it saw fit to so frequently provide him with a microphone no less pernicious than his megaphone.

It is of course precisely that factor which has over the years prompted repeated criticism of the BBC’s frequent showcasing of Choudary. A recent article in the Telegraph notes that:

“…Choudary became a regular on many of the corporation’s flagship news programmes including Newsnight and Radio 4’s Today.

During his trial Choudary described how he would “bait” the media with controversial statements and relished appearing on air.

The court heard how he had hundreds of media contacts who he would tip off before high profile demonstrations and stunts, including 31 journalists from the BBC.

Last night Tory MP Andrew Bridgen said: “The BBC has given this man hours of airtime down the years providing him with a platform to express his views.

“It was never with the intention of adding to the debate but simply for shock value. “ 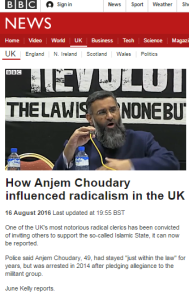 But if the BBC’s funding public is under the impression that this case will perhaps prompt some overdue introspection on the topic of the corporation’s provision of platforms for extremists, a response from a BBC spokesman which appears in a Daily Mail article may indicate that such hopes are premature.

“A BBC spokesperson said: ‘This interview took place 3 years before today’s court ruling. It is important to acknowledge that such opinions exist within the UK, throughout the segment Anjem Choudry’s views were robustly challenged by our presenter and countered by Lord Carlile, the government’s former anti-terrorism adviser.'”

Obviously some at the BBC still don’t get it.

Anjem Choudary’s BBC appearances ignored in reports on his arrest

The BBC, ‘democratic principles’ and the Jihadist recruiter