Over the years BBC audiences have seen, heard and read frequent mainstreaming promotion of the Boycott, Divestment and Sanctions (BDS) campaign against Israel. They have not, however, been provided with a comprehensive explanation of the real origins and aims of that campaign and the BBC has even absolved itself from providing such information, claiming that “it is not our role to seek out any “true agenda””. 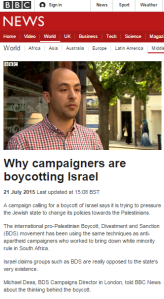 It is therefore hardly surprising that on various occasions, the BBC’s amplification of the BDS campaign has provided a platform for inaccurate representation of its roots. In June of this year, for example, listeners to BBC World Service radio were told by BDS guru Omar Barghouti that the campaign “is led by the largest coalition in Palestinian society”. In July 2015 BBC television, website and radio audiences were told by BNC activist Michael Deas that:

“…ten years ago – in July 2005 – Palestinian organisations came together to issue an appeal for a campaign of boycotts, divestment and sanctions similar to the boycott campaign that helped end apartheid in South Africa.”

Now, as reported by David Collier, clarification of the fact that the BDS campaign did not begin following a ‘call from Palestinian civil society’ has come from a perhaps unexpected source. 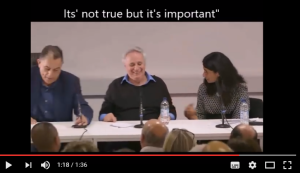 As David Hirsh notes at Engage:

“Ilan Pappé knows that it is a lie that the boycott campaign was launched by a “call” from “Palestinian civil society”.  He knows it is a lie, but he’s content nevertheless for it to be solidified into what he calls “historical records”.

In the 1970s and 80s the ANC, which positioned itself as the voice of the whole South African nation, called for a boycott of South Africa.  Campaigners for the boycott positioned themselves as passive responders to the “call” of the oppressed.    The BDS campaign against Israel has, since 2005, tried to position itself in the same way.   However in truth, British anti-Israel activists started the boycott campaign and they persuaded people in Palestine to issue the “call”.  Although neither the Palestinian Authority nor Hamas have issued a “call”, the BDS movement says that the “call” is issued by “Palestinian Civil Society”.

Ilan Pappé now admits that the “call” did not come from the Palestinians but he makes it clear that he is willing to go along with the pretence that it was.

The pretence is politically important because it positions Palestinians as being the initiators of the “call” and people outside the region as passive responders to the voice of “the oppressed”.”

With the UK being a prime hub of BDS activity, it would of course be very useful to the BBC’s funding public to learn the facts about that campaign’s origins. But seeing as the corporation has already made it clear that it is not interested in carrying out any real reporting on that topic, that seems unlikely to happen.