“We should not automatically assume that contributors from other organisations (such as academics, journalists, researchers and representatives of charities) are unbiased and we may need to make it clear to the audience when contributors are associated with a particular viewpoint, if it is not apparent from their contribution or from the context in which their contribution is made.” (Source: BBC Editorial Guidelines – Impartiality – News, Current Affairs and Factual Output)

Early on the morning of September 28th one of the lead stories on the BBC World Service radio programme ‘Newsday‘ was the death of Shimon Peres which, as the presenters of the 06:06 edition of the show pointed out, had been announced just two and a half hours previously. 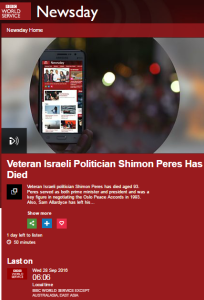 Opening with an interview with Professor Guy Ziv – author of a book about Peres – the programme later went on to broadcast an obviously pre-prepared segment by Kevin Connolly which also appeared in other programmes. Following that – at 31:45 – presenter Julian Keane told listeners:

“Just worth noting: a lot of reaction of course to the death of Shimon Peres coming through on Twitter, by text message, also on Facebook. It’s fair to say it’s a mixed picture with – just to quote some people – you’ll hear a lot of people talking about a great man, an old soldier, a wise man but also many people describing Shimon Peres as a war criminal, a terrorist. So clearly mixed views depending on where you’re coming from on the death of Shimon Peres.”

“Eh…a different view – if you like – is being seen…I’m just looking on Twitter here and the journalist and author Ben White has said ‘Shimon Peres epitomised the disparity between Israel’s image in the West and the reality of its bloody colonial policies in Palestine’, adding ‘his many victims – Palestinians and others, the displaced and the bereaved – will see Shimon Peres eulogised as a man of peace’.”

The editorial considerations behind the BBC World Service’s showcasing of anonymous baseless libels such as “war criminal” and “terrorist” against a person already unable to exercise the right of reply are obviously just as much of an issue as those which allowed amplification of the false notion of “bloody colonial policies”. But clearly the misleading portrayal of one of the UK’s most vocal pro-Hamas ideologues – who has made a career out of anti-Israel activism – as a mere “journalist and author” is a breach of editorial guidelines on impartiality.

Moreover, a later edition of the same programme at 08:06 saw those editorial guidelines breached yet again after ‘Newsday’ editors elected to provide the promoter of that false notion with further amplification. At 27:20 presenter Lawrence Pollard told listeners:

“Now more on the death of the former Israeli president and prime minister Shimon Peres. He’s died aged 93. Tributes have come in from leaders around the world including former president Bill Clinton who signed the Oslo Accord [sic] with him; the first peace agreement with the Palestinians. Mr Peres, he said, was a genius with a big heart who used his gifts to imagine a future of reconciliation, not conflict. The warmth hasn’t been universal however. Let’s get a reaction from Ben White: a journalist who’s written extensively on Middle East affairs. He’s based in Cambridge and joins us now. We’ve heard many tributes to Shimon Peres – what’s your view? A giant figure? What’s his historical record?”

White: “Good morning. Thanks for having me on. I think there’s just a couple of points to make, for me, particularly this morning after his passing. Firstly the historical record shows that his image, particularly in the West, as a dove or perhaps as a hawk turned dove; that image is belied by the facts. So for example his military and political career; he was responsible for…he had a key role really in beginning Israel’s clandestine nuclear programme in the ’50s and ’60s. In the ’70s he also had an important role in beginning the illegal Israeli settlements in the West Bank, including settlements built on privately owned Palestinian land that was expropriated. And in 1996, notoriously, he was prime minister during a particularly brutal Israeli operation in Lebanon that included the massacre at Qana. So there is the historical record which by and large is being omitted really…”

Pollard: “OK – that’s interesting because this narrative is, I think, in a lot of the obituaries; that he starts as a hawk and then moves towards a sort of reconsideration. I mean [laughs] we spoke to someone who knew him quite well [who] said ‘well, he came to see some errors of judgement’. Let’s talk about the settlements. He may well have been part of the government that began the settlements on what most people refer to as occupied land but the fact that he came to see that as a stumbling block to peace –it’s quite a great thing for a man to change his mind, isn’t it?”

White: “Yeah – OK. So actually that’s an important point because this idea of him changing actually helps us to take a critical look at how something like the Oslo Accords – presented as his greatest achievement – what they actually achieved and what Israel’s purpose was with them. To go back to the time, Itzhak Rabin – of course the assassinated prime minister, fellow Labour member with Shimon Peres – shortly before he was assassinated in 1995, so two years after the first Oslo Accords were signed, Rabin said to the Knesset that what Israel wanted through those peace agreements was – quote, unquote – a Palestinian entity that would be less than a state. And he made it very clear that Israel intended to keep Jerusalem as its united capital and that Israel would also in the long term annex and maintain key settlement blocs in the West Bank. Now this was the vision at the heart of Israel’s understanding of the Oslo Accords and of course, you know, it’s 20 – more than 20 years later – and we’ve seen just sort of continued encroachment and colonisation.”

Pollard: “You see what interests me is that a man who then becomes something as great as the president – I mean the highest office of state – he then writes articles – rather thoughtful articles – saying, you know, what our problem is that we are obsessed with land. And I say again, you know, a man who changes his mind in his own analysis of his own political record is a rare thing and I would have thought, something to mark and honour but you seem to disagree quite strongly. You don’t seem to give him credit for sort of changing his mind that way.”

White: “Well I think…a few years ago for example Shimon Peres described the Palestinians as – quote – self-victimising and, to me at least, that kind of language from a person with his track record; a person say, you know, who if he’d had a similar governmental role in other countries would be described as a war criminal…”

Pollard: “But he did – but to be fair to him – he did also strike a deal with the Palestinians. He didn’t impose the Oslo Accords on anyone. He signed it and won the peace process [sic – prize] with Yasser Arafat the much respected and much-loved Palestinian leader amongst Palestinians.”

White: “Absolutely – but at the time of the signing of the Oslo Accords many Palestinians were – and that number has only grown – highly critical of the framework that was being signed and of the sort of political process that was being entered into there. Remember of course that, you know, the Qana massacre for example, you know, more than a hundred civilians killed in Lebanon…”

Pollard: “After which he immediately lost the election, didn’t he?”

White: “Yes, and sort of shockingly of course. That military venture by Peres – and remember; this is ’96: this is sort of 3 years after his apparent sort of conversion to the cause of peace – that campaign was widely seen by people as a pre-election move. OK: so killing Lebanese civilians is a pre-election gesture even if it didn’t…even if it didn’t work. And I think the reason why I think it’s important to have these elements in our sort of…an examination of his life is that too often the victims of Israeli policies – primarily Palestinians but also people in the wider region – are forgotten when their leaders like Ariel Sharon a few years ago, Shimon Peres now, are eulogized – particularly by Western leaders.”

Pollard: “Ben – many thanks indeed. Ben White; journalist based in Cambridge. Ehm…interesting the point that he raises about the direction of the obituaries that we’ve been hearing in the past few hours since the death was announced.”

Anyone familiar with Ben White’s record – and the sole raison d’être behind his ‘journalism’ – would not be surprised in the least by his promotion of propaganda tropes such as “war criminal”, “illegal settlements” and “colonisation” or his false claims concerning a supposed “pre-election move” which erase from audience view both the Hizballah missile attacks against Israeli civilians which preceded Operation Grapes of Wrath or the post-Oslo surge in Palestinian terror attacks which were the real cause of Peres’ failure to win the 1996 election.

However, the vast majority of listeners to this programme around the world would of course have no idea of who Ben White is, no familiarity with his monochrome political agenda and no appreciation of the motives behind his appearance on this programme. And the trouble is that – in clear breach of BBC editorial guidelines – no effort was made by the ‘Newsday’ presenters to provide listeners with the relevant information concerning White’s “particular viewpoint” which would enable them to put his quoted Tweets or his long and cosy chat with Pollard into their appropriate context.