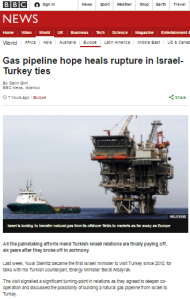 “Bilateral relations went into the deep freeze in May 2010 when Israeli commandos stormed the Mavi Marmara aid ship as it tried to breach the blockade of Gaza. Ten Turkish activists on board were killed.”

The Mavi Marmara was of course not an “aid ship” at all. As documented in the UN’s Palmer Report (p. 47), it carried 546 passengers but no humanitarian aid supplies for the people of the Gaza Strip.

“If the flotilla had been a purely humanitarian mission it is hard to see why so many passengers were embarked and with what purpose. Furthermore, the quality and value of many of the humanitarian goods on board the vessels is questionable. There were large quantities of humanitarian and construction supplies on board the Gazze 1, Eleftheri Mesogeio and Defne-Y. There were some foodstuffs and medical goods on board the Mavi Marmara, although it seems that these were intended for the voyage itself.  Any “humanitarian supplies” were limited to foodstuffs and toys carried in passengers’ personal baggage. The same situation appears to be the case for two other of the vessels: the Sfendoni, and the Challenger I. There was little need to organize a flotilla of six ships to deliver humanitarian assistance if only three were required to carry the available humanitarian supplies. The number of journalists embarked on the ships gives further power to the conclusion that the flotilla’s primary purpose was to generate publicity.”

The same inaccuracy has been seen in previous BBC reports and it has on occasion (though not consistently) been corrected or amended. Despite that, nearly six and a half years after the incident and over five years since the publication of the Palmer Report, the BBC continues to promote an inaccurate portrayal of the Mavi Marmara, its purpose and its passengers.

Following the publication of this post and communication from BBC Watch, the article was amended and the above passage now reads as follows: