October 31st saw the appearance of two BBC News website reports concerning the long-awaited election of a president in Lebanon. 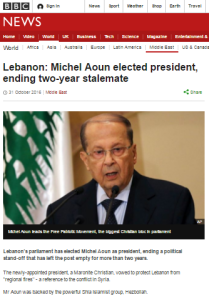 A report currently going under the headline “Lebanon: Michel Aoun elected president, ending two-year stalemate” underwent a series of amendments throughout the day but all versions of the article informed readers that:

His candidacy was blocked by the rival, Sunni-dominated Future Movement until a deal was struck earlier this month.”

An additional report by Carine Torbey titled “Lebanon: Will new president end political crisis?” portrays the story of the 30 month-long failure to elect a president as follows:

“For almost two-and-a-half years, Lebanon – politically split along sectarian fault lines – has been without a president. 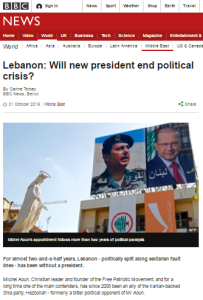 Michel Aoun, Christian leader and founder of the Free Patriotic Movement, and for a long time one of the main contenders, has since 2006 been an ally of the Iranian-backed Shia party, Hezbollah – formerly a bitter political opponent of Mr Aoun.

That alliance was sufficient to make him persona non grata for the main Sunni political group in the country, the Future Movement, led by former Prime Minister Saad Hariri and with strong links to Saudi Arabia.

A standoff, which became known as the “presidential vacuum”, ensued, effectively paralysing the country since May 2014.

On Monday, Mr Aoun was finally elected to the presidency with, remarkably, the support of the Future Movement.”

BBC audiences would therefore be likely to go away with the impression that the Future Movement is responsible for the fact that Lebanon was without a president for nearly two and a half years.

Just days before, listeners to BBC Radio 4’s ‘From Our Own Correspondent’ and BBC World Service radio’s ‘The Essential’ had heard a BBC journalist visiting Lebanon – James Longman – suggest that the inability to elect a president was linked to corruption.

“The contempt for this country’s politicians is palpable. Unable to elect a president for over two years, they’re widely considered to be corrupt businessmen sharing the spoils of government contracts which rarely benefit the population.”

Back in August 2015, Carine Torbey portrayed the same issue as follows:

“The 27th parliamentary session to elect a president in August was as ill-fated as the previous 26.

Lebanon is caught in deep political divisions mirroring the regional fault lines. The MPs who are deeply allied to one player or another in the region, have been unable to decide on a president, a mainly ceremonial role, reserved for a Christian in a sectarian power-sharing system.”

And readers may recall that in June of this year, BBC Monitoring produced a backgrounder on the topic of the failed attempts to elect a president which similarly refrained from informing BBC audiences of the fact that the parliamentary sessions aimed at dong so were repeatedly boycotted by Hizballah and its allies – as Yalibnan reported in April:

“Since Sulaiman ended his presidential term in May 2014, Hezbollah and most of its March 8 allies boycotted 38 parliamentary sessions that were allocated for electing a president

Without a two-thirds quorum, parliament sessions led to bickering, as Iran-backed Hezbollah insisted that it would only participate if it received solid guarantees that its candidate, Aoun, would be elected.”

In September Yalibnan reported that:

“Hezbollah deputy chief Sheikh Naim Qassem (usually referred to as No. 2) admitted on Sunday that it his party is behind the obstruction of Lebanon presidential election when [he] called on The Future Movement to “end its hesitation” and agree to back Free Patriotic Movement founder MP Michel Aoun’s presidential bid claiming that Hezbollah’s MPs would immediately end their boycott of the electoral sessions in order to vote for Aoun. […]

The Lebanese parliament failed again September 8th and for the 44th time in a row to elect a president to replace Michel Suleiman whose term ended on May 25, 2014.

As in the past sessions the parliament was unable to reach a quorum because the Iranian-backed Hezbollah militant group and its ally MP Michel Aoun’s Change and Reform bloc MPs boycotted the session, because they could not reportedly guarantee Aoun’s election as a president.”

The BBC’s failure to report on those two and a half years of Hizballah arm-twisting does not only leave its audience lacking relevant background concerning the process of the election of the Lebanese president but also affects their ability to comprehend the context to Aoun’s stances and policies – some of which were already revealed in his first address as president.

“For the untrained ear, President Michel Aoun’s inaugural speech sounded like a mishmash of old chewed slogans about Lebanese “national unity”, harmony and patriotism. But between the lines, Aoun loaded his speech with code words that gave away the nation’s policy under his tenure.

Right after giving Iran what it wanted, President Aoun delivered what Hezbollah wanted. “In the conflict with Israel, we will not spare any effort or resistance to liberate what remains of occupied Lebanese land,” Aoun said, thus trashing UNSC Resolution 1701, which calls for diplomatic resolution for disputed border territory between Lebanon and Israel.”

Since Israel’s withdrawal from southern Lebanon over 16 years ago, the myth of “occupied Lebanese land” in the Mount Dov area has of course been used by Hizballah as an excuse for defying UN resolutions demanding its disarmament – despite the fact that the claim has been rejected by the UN.

“In 2005, then-UN Secretary General Kofi Annan rejected the Lebanese government’s claim that Shebaa Farms was Lebanese territory in a report (.pdf) to the Security Council:

Obviously the BBC has not made sufficient effort to provide its audience with the full range of information required to meet its remit of enabling understanding of this particular issue.

Dumbing down ME politics with BBC Monitoring