The launch by the British Jewish community of a very useful new resource in the form of a website called ‘Balfour 100’ on the 99th anniversary of the Balfour Declaration provides an opportunity to take a look at how the BBC has portrayed that document over the years and what information is available to members of the public conducting a search online.

Significantly, the timeline in the BBC News website’s current “Israel Profile” begins in 1917. While erasing the context of World War One from its portrayal of British operations in the region, the Balfour Declaration is described as follows: 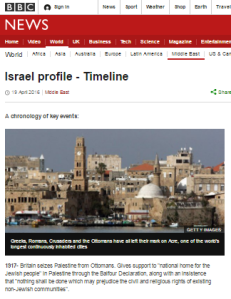 “1917- Britain seizes Palestine from Ottomans. Gives support to “national home for the Jewish people” in Palestine through the Balfour Declaration, along with an insistence that “nothing shall be done which may prejudice the civil and religious rights of existing non-Jewish communities”.”

In a documentary titled ‘The Birth of Israel‘ – produced within the framework of BBC coverage of the 60th anniversary of Israel’s declaration of independence in 2008 – Middle East editor Jeremy Bowen’s portrayal of the Balfour Declaration (from 07:50 here) started off accurately and impartially.

“In November 1917 as British troops were fighting their way up to Jerusalem, seizing Palestine from the Turks, the Foreign Secretary in London wrote a letter that became known as the Balfour Declaration. The Balfour Declaration said the British would view with favour the establishment in Palestine of a national home for the Jewish people and use their best endeavours to make it happen. And it also said it was clearly understood that nothing shall be done which may prejudice the civil and religious rights of existing non-Jewish communities in Palestine or the rights and political status enjoyed by Jews in any other country.”

Bowen then turned to the promotion of editorialised commentary clearly designed to shape audience opinion:

“Now, there’s a whole series of incompatible promises in that and the British never found a way to keep them. As a result they were regarded as betrayers by both sides. For the Zionists it was a big step forward. But, said the writer Arthur Koestler, it was an impossible idea: one nation promising another the land of a third. It did a great deal to create the conflict that continues today.”

In November 2001 the BBC News website produced a series of web pages presenting “Key Documents” related to “Israel and the Palestinians” which are still accessible today. The page titled “The Balfour Declaration” includes the text of the letter, preceded by the following introduction:

“The Balfour Declaration of 1917 was the first significant declaration by a world power in favour of a Jewish “national home” in what was known as Palestine.

Historians disagree as to what the then British Foreign Secretary, Arthur James Balfour, intended by his declaration. The letter has no mention of the word “state”, and insists that nothing should be done “which may prejudice the civil and religious rights of existing non-Jewish communities in Palestine”.

The letter was addressed to Lord Rothschild, a leader of the Jewish community in Britain. It became an important arm of the movement to create a Jewish state in Palestine.”

Another article from November 2001 which is still available online is also titled “The Balfour Declaration” and was apparently intended to act as a backgrounder. The article opens with the following assertion:

Following a reasonable presentation of the document itself, readers are told that:

“There are various theories as to why the British came to make the declaration. These range from there being a desire to get influential Jewish American backing for the WWI effort, to a belief in the Old Testament right of Israel to claim Palestine as its own.

An Israeli revisionist historian, Tom Segev, says many of the British feared the Jews, believing they secretly ran the world. And not really knowing what to do with Palestine, the creation of a Jewish homeland was therefore convenient for the British. But, says Segev, it had the effect of setting Jew against Arab.

Whatever the truth, the anniversary of the Balfour Declaration is a traditional time for anti-British demonstrations by some Palestinians.

There has also been some speculation that when Osama Bin Laden said Islam had been “tasting this humiliation and contempt for more than 80 years,” it was to the Balfour Declaration he was referring.”

A timeline titled “A History of Conflict” – undated but still available online – includes an entry for 1917 which inaccurately claims that Ottoman rule over Palestine was brought to an end by “Arab forces” rather than by Allenby’s troops.

“At the time of World War I the area was ruled by the Turkish Ottoman empire. Turkish control ended when Arab forces backed by Britain drove out the Ottomans.

Britain occupied the region at the end of the war in 1918 and was assigned as the mandatory power by the League of Nations on 25 April 1920.

During this period of change, three key pledges were made.

However, at the same time, the secret Sykes-Picot Agreement between war victors, Britain and France, divided the region under their joint control.

Then in 1917, the British Foreign Minister Arthur Balfour committed Britain to work towards “the establishment in Palestine of a national home for the Jewish people”, in a letter to leading Zionist Lord Rothschild. It became known as the Balfour Declaration.”

As has been noted here on previous occasions, the Hussein-McMahon correspondence did not include Palestine, as Sir Henry McMahon himself pointed out in a letter to the Times in 1937.

As we see, while the text of the Balfour Declaration is accurately represented by the BBC, the corporation regularly allows itself to engage in related commentary which is less than objective. With the Balfour Declaration set to be the subject of political campaigning in the approach to its 100th anniversary this time next year (see ‘related articles’ below), the BBC’s funding public is obviously in need of both accurate and impartial information on the topic.