In her recent article (previously discussed here) concerning the question of who will succeed Mahmoud Abbas in his roles as president of the Palestinian Authority, chair of the PLO and head of the Fatah party the BBC Jerusalem bureau’s Yolande Knell informed audiences that:

“One potential post-Abbas scenario would see the division of his titles: President, head of Fatah, and Chairman of the Palestine Liberation Organisation (PLO).

If different individuals took these jobs it would allow for a more collective political leadership.

This might involve Saeb Erekat, chief negotiator and secretary general of the PLO, and Nasser al-Kidwa, a former foreign minister and representative to the UN who is also nephew of the revered late leader, Yasser Arafat.” 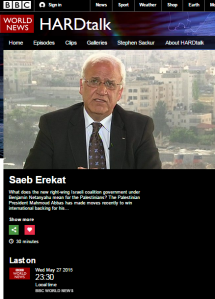 BBC audiences are of course familiar with Saeb Erekat due to his frequent appearances on the corporation’s various platforms. They are however considerably less well-informed with regard to the views expressed by Saeb Erekat when communicating with his own people rather than with the audiences of Western media organisations.

As our colleagues at CAMERA documented, Erekat recently proclaimed his “admiration” for imprisoned terrorists.

“According to Palestinian Media Watch (PMW), a non-profit organization that monitors Arab media in eastern Jerusalem, the Gaza Strip and the West Bank (Judea and Samaria), Erekat offered words of praise terrorists in an Oct. 19, 2016 edition of Al-Hayat Al-Jadida, the official PA daily newspaper.

Erekat, referring to Palestinians imprisoned by Israel for committing acts of terrorism, said:

‘Our brave prisoners, who gave and sacrificed their freedom for Palestine and its freedom, are worthy of aid, support, and constant activity by us in order to release them and put an end to their suffering. The prisoners’ cause is a national and central cause, and we bow our heads in admiration and honor of the prisoners’ sacrifices, for their acts of heroism, and for their ongoing battle with the occupation.'”

Additional documentation of the messaging for domestic audiences from the man functioning as chief negotiator for the PLO (which ostensibly renounced terrorism, recognised Israel and committed itself to the peace process over two decades ago) can be found at PMW.

With Erekat tipped by Yolande Knell as one of Mahmoud Abbas’ potential successors, BBC audiences’ understanding of the Palestinian-Israeli conflict would of course be enhanced were they provided with some insight into the stance that he (along with other potential candidates) presents to his domestic audience rather than just the PR messaging promoted for Western ears.