This week one of the juveniles who carried out a terror attack in Jerusalem’s Pisgat Ze’ev neighbourhood in October 2015 was sentenced to 12 years of imprisonment.

“The 14-year-old from East Jerusalem was convicted earlier this year on two counts of attempted murder for the October 2015 knife attack, in which he and his cousin critically injured a 12-year-old boy and a 25-year-old man.

The teenage assailant was 13 when he carried out the attack along with his 15-year-old cousin, who was shot dead by security forces responding at the scene.

According to the indictment filed in May, the court rejected the defense presented by the teen’s attorneys that the cousins had no intention of murdering the Israelis, but rather had simply wanted to “scare the Jews.”

The judges determined that the cousins went on the stabbing spree in order to “help Hamas and become martyrs.” Still, they took into account the defendant’s apology and the fact that his elder cousin had stabbed the two victims.”

As has been noted here before, it is extremely rare to see any follow-up reporting by the BBC after Palestinian terrorists have been arrested and put on trial (although the corporation has produced coverage of the legal process in cases in which the perpetrators were Israeli Jews) and it was therefore unsurprising to see that audiences were not informed of the outcome of the trial of the Pisgat Ze’ev attacker even though the story was covered by the BBC extensively at the time.

On the day of the attack (October 12th 2015) the BBC News website produced a report which was amended to include a politicised description of its location.

“Two youths were stabbed earlier at a settlement in East Jerusalem, leaving one of the victims, a 13-year-old boy, in a critical condition.”

On October 15th and 16th the BBC’s Middle East editor Jeremy Bowen produced written and filmed reports in which the father of the older attacker was showcased and Bowen roundly dismissed the subject of incitement. 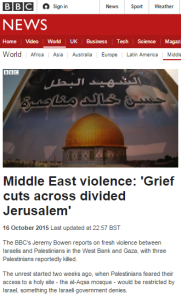 “When I met Khaled Mahania, the father of 15-year-old Hassan Mahania, who attacked and badly wounded young Israelis in a settlement in East Jerusalem, he is unable to explain.

Hassan was shot dead as he carried out the attack; his 13-year-old cousin and accomplice was run down by a car and badly hurt.

The Israeli government blames the attacks on incitement by political and religious extremists. A video has circulated of a Muslim cleric in Gaza waving a knife and calling on Palestinians to slit the throats of Jews.

Khaled Mahania told me he had not replaced his son’s smartphone since he broke it last year. He had no mobile internet access, and none at home.

Khaled had even thrown out the TV because he believed his children should read and talk to each other. Khaled broke down as he said his son was a typical teenager, not political and certainly no radical.”

When the recently sentenced youth was convicted in May, it was reported that:

“The indictment stated that Manasra returned from school and met his cousin. “They talked about the ‘situation’ at the Al-Aqsa Mosque and the state of the Gaza Strip residents, the PA and Hamas. Intending to help them, they decided to become martyrs and be killed as part of a religious war.”

Since the surge in violence began last autumn, Bowen and his colleagues have repeatedly dismissed the issues of incitement and glorification of terrorism as contributing factors, preferring instead to promote PLO approved talking points concerning “the occupation” to their audiences.

Remarkably, the fact that this Palestinian teenager – and many others – expressed a will to die as a “martyr” in a “religious war” has not distracted the BBC from promotion of that chosen political narrative or prompted it to carry out any serious journalistic investigation into the issue of incitement.