On the morning of November 25th the BBC News website’s Middle East page published a second report relating to the wave of fires in Israel. Despite remaining the lead story on that webpage for over two days, the article – titled “Israel fires: Dozen suspects arrested on suspicion of arson” – was not updated to inform audiences of developments in the story, although ‘analysis’ from Yolande Knell was added later in the day. 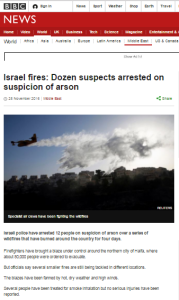 BBC audiences hence remain unaware of the severe fire damage in the community of Nataf or of the fact that 350 families had to be evacuated from Halamish where tens of homes were destroyed and dozens damaged. Neither were they informed that in all some 32,000 acres of forest were destroyed by the fires along with hundreds of homes – over 500 in Haifa alone. The fact that more than 130 people had to be given medical treatment was described in the BBC’s report thus:

“Several people have been treated for smoke inhalation but no serious injuries have been reported.”

Readers of this article were told that:

“Another town in the north, Horashim, has also been evacuated as a blaze approaches, Haaretz reported.”

Anyone trying to locate the ‘town’ of ‘Horashim’ would have had considerable difficulty seeing as no such place exists. In fact, the community which was evacuated on the morning of Friday, November 25th is called Harashim – as the BBC should have been able to report given that the name is accurately presented in the source link.

BBC Watch has contacted the website regarding that inaccuracy.

As the article’s title and opening sentence indicate, its main focus is the topic of the arrests made in connection with the fires.

“Israeli police have arrested 12 people on suspicion of arson over a series of wildfires that have burned around the country for four days.”

“Israel’s Fire and Rescue Services operations chief Shmulik Fridman told Israel radio on Friday that more than half the fires had been caused by arson.

Israeli Prime Minister Benjamin Netanyahu said that if any of the fires were started deliberately they would be treated as an act of terrorism.

Education Minister Naftali Bennett, leader of the right-wing Jewish Home party, hinted at seditious Israeli Arab or Palestinian involvement, Tweeting: “Only those to whom the country does not belong are capable of burning it.”

On this topic too, the article was not been updated to reflect developments after its initial publication.

“In all, at least 35 people have been arrested since Thursday on suspicion of setting fires or inciting others to do so. More than 15 were Palestinians arrested by the Israel Defense Forces and Shin Bet security service, an army spokesperson said. At least 10 of those being held are Israeli Arabs, according to Hebrew media reports.”

The investigations into the causes of the fires are of course still ongoing but it will be interesting to see whether the BBC will report their results.

BBC coverage of fires in Israel misleads on Carmel casualties