Members of the public looking for BBC produced information concerning the 1947 Partition Plan will find a mixed bag of results.

The content available online is untagged and hence does not appear in one place or in chronological order of publication. Members of the public might therefore encounter backgrounders in which no mention is made of the fact that the Partition Plan was rejected by the Arab states and the ‘Higher Arab Committee’ – and thus rendered irrelevant – or that violence ensued.

For example, a backgrounder dating from 1997 states:

“The Palestine partition plan was approved by the United Nations in its 128th plenary session November 29, 1947. This is the official text of the resolution which divided Palestine and created one Jewish and one Arab state.

The resolution was approved by the general assembly – 33 votes in favour, 13 votes against, with 10 abstentions.”

The timeline appearing in the BBC’s online Israel profile states:

“1947 – United Nations recommends partition of Palestine into separate Jewish and Arab states, with international control over Jerusalem and its environs.”

“The UN voted to divide Palestine into two states: one Arab, one Jewish. In 1948, Israel declared its independence; the first Arab-Israeli war began the moment the British left.”

A piece of ‘analysis‘ from 1997 even leads audiences to mistakenly believe that the fact that the Partition Plan was never implemented is attributable to the UN rather than to Arab rejection.

“Even as the votes were cast, it was unclear if the Zionists would get the two-thirds majority they needed. In the end, the resolution was passed by 33 votes to 13; Britain was one of 10 states that abstained.

The UN lacked the means to enforce the resolution and Britain had already said it intended to withdraw from Palestine. But the partition resolution gave new impetus – and new legitimacy – to the quest for Jewish statehood.”

In additional BBC material still available to audiences online the rejection is inaccurately portrayed as coming from one particular source and the role of the Arab nations in opposing the plan (and threatening violence should it be implemented) is erased from audience view. 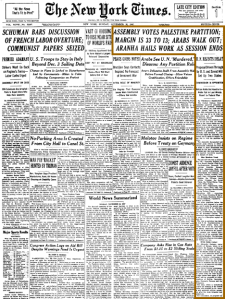 “The United Nations General Assembly decided in 1947 on the partition of Palestine into Jewish and Arab states, with Jerusalem to be an international city. The plan, which was rejected by the native Arabs, was never implemented.” [emphasis added] (source)

“The UN set up a special committee which recommended splitting the territory into separate Jewish and Palestinian states. Palestinian representatives, known as the Arab Higher Committee, rejected the proposal; their counterparts in the Jewish Agency accepted it.” [emphasis added] (source)

“The United Nations General Assembly decided in 1947 on the partition of Palestine into Jewish and Arab states, with Jerusalem to be an international city. The plan, which was rejected by the Palestinians, was never implemented.” [emphasis added] (source)

The one backgrounder (dated November 2001) in which the Arab states’ rejection of the Partition Plan is documented was corrected in 2014 after BBC Watch highlighted its erroneous claim that Ben Gurion had rejected the UN resolution.

“The Palestinians and Arabs felt that it was a deep injustice to ignore the rights of the majority of the population of Palestine. The Arab League and Palestinian institutions rejected the partition plan, and formed volunteer armies that infiltrated into Palestine beginning in December of 1947.”

The BBC’s inconsistent portrayal of the Partition Plan is obviously relevant from the point of view of the accuracy of information provided to audiences but it also has wider implications. As readers may be aware, the corporation bases its enduring refusal to describe Jerusalem as Israel’s capital on the misguided claim that: 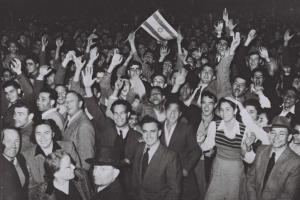 “…a UN resolution passed in 1947 has not been rescinded. It calls for the whole of Jerusalem to be an international city, a corpus separatum (similar to the Vatican City), and in that context, technically, West Jerusalem is not Israeli sovereign territory.”

Ahead of next year’s 70th anniversary of that UNGA resolution, it is clearly high time for the BBC to ensure that all its available related content meets editorial standards of accuracy and impartiality and that its audiences – as well as journalists and other staff – are given an accurate understanding of the relevance of the resolution today.

0 replies on “Reviewing BBC portrayal of the 1947 Partition Plan”