Back in August we reviewed the BBC’s coverage of Hizballah’s violations of UNSC resolution 1701 throughout the ten years since it was passed.

“The BBC’s public purpose remit commits it to keeping its funding public “in touch with what is going on in the world” and to building “a global understanding of international issues” and so it would be reasonable to assume that audiences have been kept up to date on the issues pertaining to implementation of Resolution 1701 throughout the decade since it was adopted – but is that the case?”

As was noted in that review:

“In 2013 BBC audiences were told by the corporation’s man in Beirut, Jim Muir, that “Hezbollah has scrupulously observed the ceasefire that ended hostilities in 2006”. In 2015 Orla Guerin reported from south Lebanon but failed to use the opportunity provided by a rare BBC visit to that area to inform audiences of Hizballah’s use of civilian villages to store weapons and as sites from which to launch attacks against Israel.”

“The map, according to Channel 2 News, features over 200 towns and villages which the organization has turned into its operations bases, and shows over 10,000 potential targets for Israeli strikes in the event of a new war with the terror group.” 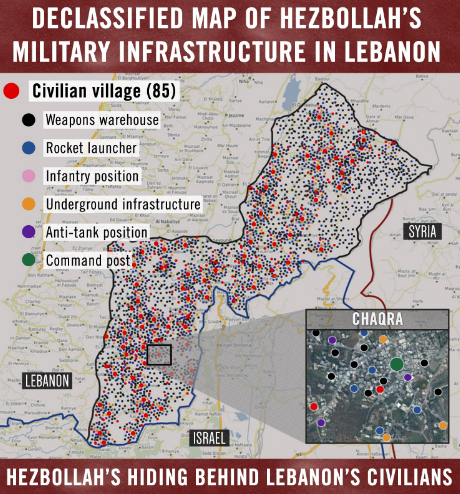 BBC audiences, however, remain unaware of this issue and will therefore be incapable of understanding the context to any future Israeli actions which might be necessary to protect the civilian population of northern Israel.