Earlier this week the BBC News website’s Middle East page published an article promoting Hamas’ unsubstantiated claims concerning the murder of one of its members in Tunisia which was previously discussed here. 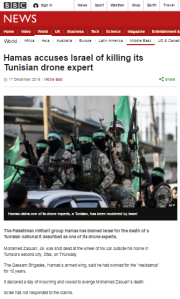 That article included an incomplete portrayal of Hamas’ designation as a terrorist organisation and its record of terror activity while amplifying the group’s ‘resistance’ narrative.

“Hamas, which rules the Gaza strip, is seen as a legitimate resistance group by its supporters – but is classed as a terrorist outfit by the US and EU.

It refuses to recognise Israel as a country, and regularly fires rockets from Gaza into the Jewish state.

Israel has held Gaza under a blockade for the past decade, and conducted several offensives and air strikes against the territory – which it says are needed to curtail Hamas rocket fire.”

Subsequently, that section of the article was amended and the references to Hamas’ terror designation and firing of missiles at civilian communities in Israel were removed. The edited version now reads:

“Hamas, which is in control of the Gaza Strip, does not recognise Israel’s right to exist, and there have been years of conflict between the two sides.

It has occasionally sent drones across the border into Israel but these have either crashed or been shot down.”

The context of Hamas’ terror designation, its long record of terror activity and its self-declared mission to destroy Israel is obviously crucial to audience understanding of the allegations put forward in this article. Rather than improving on the incomplete information previously given, the amendments made do the exact opposite and thus reinforce the impression that the main purpose of this article was to promote Hamas’ evidence-free speculation.