Events at the UN Security Council received generous coverage on the BBC News website on December 23rd and 24th. BBC audiences found articles relating to Egypt’s withdrawal of its draft resolution and reports concerning the subsequent tabling of  the resolution by New Zealand, Senegal, Venezuela and Malaysia which was approved by the UNSC on December 23rd. 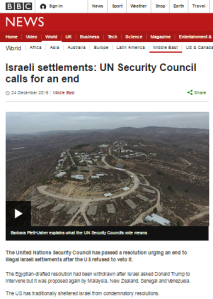 2) Israel blasts US over UN vote on settlements

The narrative promoted in those reports was uniform and conformed to existing BBC editorial policy.

a) BBC audiences were repeatedly told that the resolution related to Israeli communities on “occupied” – rather than disputed – land and that the said territory is “Palestinian”.

“Egypt has delayed a UN vote on a text condemning Israeli settlements in occupied territory after Israel asked Donald Trump to intervene.” (report 1)

“Israel has reacted furiously over a renewed bid to bring a resolution condemning settlements on occupied land before the UN Security Council.” (report 2)

The resolution, approved by 14 votes to zero, with only the US abstaining, demands that Israel immediately “cease all settlement activities in the occupied Palestinian territory, including East Jerusalem”.” (reports 5 and 6)

“The move comes after the Security Council adopted a resolution demanding an end to Israeli settlement building on occupied land.” (report 6)

b) BBC audiences were also repeatedly told that Israeli communities in Judea & Samaria and parts of Jerusalem are “illegal” and breach “international law” while the presentation of alternative views on that issue was limited to a box-ticking reference to the Israeli view with no further detail or explanation.

“The resolution submitted by Egypt called for Israel to stop settlement activity in the West Bank and East Jerusalem, which it said breached international law. […]

About 500,000 Jews live in about 140 settlements built since Israel’s 1967 occupation of the West Bank and East Jerusalem. The settlements are considered illegal under international law, though Israel disputes this.” (reports 1, 2, 4, 5, 6)

“The United Nations Security Council has passed a resolution urging an end to illegal Israeli settlements after the US refused to veto it.” (report 4)

“It [the resolution] says Jewish settlements are a “flagrant violation under international law and a major obstacle to the achievement of the two-State solution and a just, lasting and comprehensive peace”. (reports 5 and 6)

c) The reports failed to distinguish between “settlement building” and construction in existing communities, thereby giving audiences the mistaken impression that new communities are being built.

“The Obama administration has long made clear its opposition to Israeli settlement building and there had been speculation that in its final month it might allow a resolution against settlements to pass at the UN.” (report 1)

“But the outgoing Obama administration has long made clear its opposition to Israeli settlement-building in occupied territory and there had been speculation that in its final month it might allow a resolution against settlements to pass at the UN.” (report 2)

“This is a vote on a resolution that condemns the building of Israeli settlements on occupied Palestinian territory. It says it’s illegal under international law. […]

“They themselves [the US administration] have been very critical of settlement building over the last year.” (report 3)

“The resolution reflects an international consensus that the growth of Israeli settlement-building has come to threaten the viability of a Palestinian state in any future peace deal.” (‘analysis’ from Barbara Plett Usher, reports 4 and 5)

d) One of the reports promoted the inaccurate implication that construction under the current Israeli government is exceptional.

“And it [the resolution] says that the amount of building under this Israeli government is threatening the possibility of the creation of  Palestinian state in any future peace deal.” (report 3)

e) The reports uncritically amplified the PLO narrative of ‘settlements as an obstacle to peace’.

“The issue of Jewish settlements is one of the most contentious between Israel and the Palestinians, who see them as an obstacle to peace.” (reports 1, 2, 4)

f) References to the parts of the resolution condemning terror and incitement were to be found in just one of the BBC’s reports. In contrast to the impression given to BBC audiences, the word ‘Palestinian’ is in fact not included in that part of the text.

“French UN Ambassador Francois Delattre said the “key goal” of the resolution was “to preserve and reaffirm the two-state solution”. […]

“It also condemns the violence and terrorism. It also calls to prevent all incitement from the Palestinian side so this is a balanced text.”” (report 2)

g) While some of the later reports included reactions from “the Palestinian leadership”, none of them informed audiences of the fact that the resolution was hailed by the terror organisations Hamas and the Palestinian Islamic Jihad.

“The Palestinian leadership welcomed the UN resolution, which was passed by 14 votes to zero, with one abstention.” (report 4)

“A spokesman for Mr Abbas said: “The Security Council resolution is a big blow to Israeli policy, a unanimous international condemnation of settlements and a strong support for the two-state solution.”” (report 6)

h) Three of the later articles (reports 4, 5 and 6) quoted the US ambassador to the UN as saying that “even if all settlements were dismantled, both sides would still have to acknowledge “uncomfortable truths” and make “difficult choices” to reach peace” but none of the reports reminded BBC audiences that although Israel did indeed remove all ‘settlements’ and ‘settlers’ from the Gaza Strip in 2005, peace was not forthcoming and the Hamas terror group continues to seek the destruction of Israel.

i) None of the reports reminded BBC audiences of the 2009 freeze of construction in communities in Judea & Samaria and the fact that the Palestinians refused to negotiate during most of that ten-month freeze.

j) None of the reports provided readers with the relevant context of the Palestinian Authority’s attempts to impose an outside ‘solution’ to the conflict in preference to negotiations.

k) None of the reports provides any relevant historical background on the subject of the 1948 Jordanian occupation of Judea & Samaria and parts of Jerusalem or the 1967 Jordanian attack which subsequently left Israel in control of those areas.

Anyone wondering why the generous coverage of this story was uniformly one-sided and failed to provide BBC audiences with the full range of information necessary for proper understanding might find the following Tweet from the BBC’s Middle East editor (also retweeted by the BBC correspondent who contributed to much of the coverage) enlightening.