As was noted here in an earlier post, while BBC coverage of the UN Security Council’s adoption of resolution 2334 included reactions from “the Palestinian leadership”, none of the numerous reports informed audiences of the fact that the resolution was quickly hailed by the terror organisations Hamas and the Palestinian Islamic Jihad, with praise later added by Khaled Masha’al. 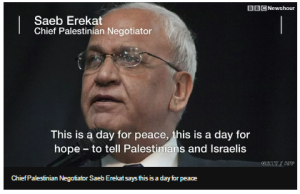 “The Palestinian leadership welcomed the UN resolution, which was passed by 14 votes to zero, with one abstention.” (source)

A spokesman for Mr Abbas said: “The Security Council resolution is a big blow to Israeli policy, a unanimous international condemnation of settlements and a strong support for the two-state solution.”

The Palestinian ambassador to the UN, Riyad Mansour said: “The Council’s action, while long overdue, is timely, necessary and important.”” (source)