With BBC audiences having read and heard terminology such as “occupied Palestinian territory”, “occupied Palestinian land” and “illegal Israeli settlements” scores of times over the last week or so in BBC coverage of UNSC resolution 2334 (see related articles below), it is interesting to take a look at the language used in an article published on December 25th on the BBC News website’s ‘Africa’ page.

Although its subject matter concerns a decades-old conflict involving an invasion, disputed territory, thousands of people living in refugee camps and more than twenty years of failed negotiations, nowhere in that article – titled “Western Sahara: Kitesurfing in the Dakhla danger zone” – did the BBC tell readers in its own words that the area is “occupied” or describe the presence of Moroccan citizens as “illegal” and at no point did the BBC endorse the narrative of one side of that dispute over the claims of the other side. 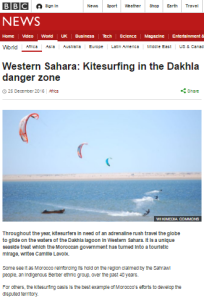 In fact, readers were specifically told that the location of the story is in “disputed territory”.

“Throughout the year, kitesurfers in need of an adrenaline rush travel the globe to glide on the waters of the Dakhla lagoon in Western Sahara. It is a unique seaside treat which the Moroccan government has turned into a touristic mirage, writes Camille Lavoix.

Some see it as Morocco reinforcing its hold on the region claimed by the Sahrawi people, an indigenous Berber ethnic group, over the past 40 years.

For others, the kitesurfing oasis is the best example of Morocco’s efforts to develop the disputed territory.”

“Since April 2016, some 146 journalists and activists have been arrested or expelled for reporting on the conflict.

The tension between the two sides has, however, not prevented kitesurfers from seeking adventure at the disputed location, while hotels continue to earn good profits.”

This is of course far from the first time that we have documented the differences in the language used by the BBC when reporting on the Palestinian-Israeli conflict and the conflict in Western Sahara. Currently, however, that double standard is particularly apparent.

A review of BBC News website coverage of UNSC resolution 2334