The death of British MP Gerald Kaufman was covered in the ‘UK politics’ section of the BBC News website on February 27th in an article and an obituary.

In the article titled “Labour MP Gerald Kaufman dies at 86” readers were told:

“A practising Jew, he was best known for his fierce opposition to the policies of the Israeli government and its treatment of the Palestinians.”

“Sir Gerald was a member of the Jewish Labour Movement and was known for his criticism of Israel, calling senior politicians from the country “war criminals” in 2002.”

That article also includes a filmed report – apparently shown on BBC television news programmes – in which viewers are told that:

“Kaufman’s bitterest attacks were reserved for Israel. In a 2002 BBC documentary he broke a pledge never to visit the country again in order to examine why his youthful admiration for the Jewish state had changed to contempt.”

In the obituary published on the same day – “Obituary: Gerald Kaufman” – BBC audiences were again told that: 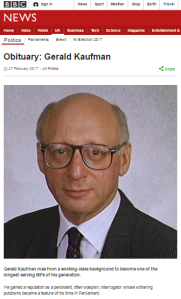 “A practising Jew, he was best known for his fierce opposition to the policies of the Israeli government and its treatment of the Palestinians.”

“Kaufman’s most vocal attacks were reserved for Israel and its policies towards the Palestinians. A member of the Jewish Labour Movement, he called for economic sanctions against Israel and a ban on sales of arms.

In 2002 he broke a longstanding pledge never to visit Israel when he went there to make a BBC documentary called The End of An Affair, which charted his early infatuation with the Jewish state as a young student and how he later became disillusioned.

He launched a bitter attack on the Israeli prime minister, Ariel Sharon. “It is time to remind Sharon,” he said, “that the Star of David belongs to all Jews, not to his repulsive government.”

He often compared Israel’s treatment of the Palestinians with South African apartheid and, described Israel’s use of white phosphorus flares in the 2009 offensive in Gaza as “war crimes”.

“I long ago gave up hope for the Israelis participating in a negotiated solution,” he said in 2014.”

Despite the fact that Kaufman went far beyond “criticism of Israel”, the BBC elected to airbrush from the picture entirely his record of antisemitic remarks, his collaboration with Hamas and its supporters and his meetings with Hamas representatives – a terror organisation proscribed by the British government.

The Jewish Chronicle, in contrast, managed to give its readers a realistic portrayal of the MP’s record.

“Sir Gerald was a controversial figure. His years of anti-Israel activity drew criticism from the Jewish community, but it was his repeated antisemitic comments which brought the most serious anger.

In 2015, he was recorded saying the British government had become more pro-Israel in recent years.

He said: “It’s Jewish money, Jewish donations to the Conservative Party – as in the general election in May – support from the Jewish Chronicle, all of those things, bias the Conservatives.”

Mr Corbyn said the remarks were “completely unacceptable and deeply regrettable” but took no disciplinary action against his MP. Sir Gerald never commented and refused to speak to the JC  about the incident.

In 2011, Sir Gerald turned to a neighbour on the Commons green benches as pro-Israel MP Louise Ellman rose to speak, and muttered: “Here we are, the Jews again.”“

While such context is obviously crucial to the reader’s understanding of Kaufman’s anti-Israel stance as portrayed in the report and obituary, the BBC refrained from providing it.