Whilst nobody familiar with Banksy would be surprised by his use of imagery associated with classic antisemitism, it's troubling that journalists who pride themselves on critically scrutinising every Israeli claim didn't challenge the pro-Palestinian artist when he floated the risible claim that his latest project was benignly designed to promote dialogue.

The British performance artist known as Banksy has pulled off quite a feat – managing to lure dozens of journalists to Bethlehem to cover his latest work of agitprop, a “hotel” next to Israel’s security barrier called “The Walled Off Hotel“.

The planned opening of the nine-room guesthouse/exhibit, decorated with depictions of the conflict, was covered by The Guardian, Times of London, The Telegraph, The Independent, Financial Times, Daily Mail, Daily Mirror, The Sun, The Herald, Irish Times, Sky News, Channel 4 News, ITV News and BBC.

Though the Guardian and other British media outlets have reported that the hotel – “overlooking the worst view in the world” – will host Palestinian exhibitions designed by Banksy to “promote dialogue”, even a cursory review indicates that this is clearly untrue.

Art adorning the walls of “The Walled Off Hotel” include a version of the old BBC Test Card F with the words “Free Palestine”, a photo set glorifying Palestinian “resistance”, statues choking on tear gas fumes and an oil painting depicting a bulldozer demolishing a village.  Conversely, there are no artistic displays in the hotel that give the Israeli perspective on the fence or provide background on the humanitarian impact of the deadly suicide bombers who used to cross over the previously porous boundary.

But, perhaps the most troubling piece of hotel art, which you can see on the official Facebook page of The Walled Off Hotel, is this painting of Jesus Christ with a (IDF) sniper’s red dot sight on his head. 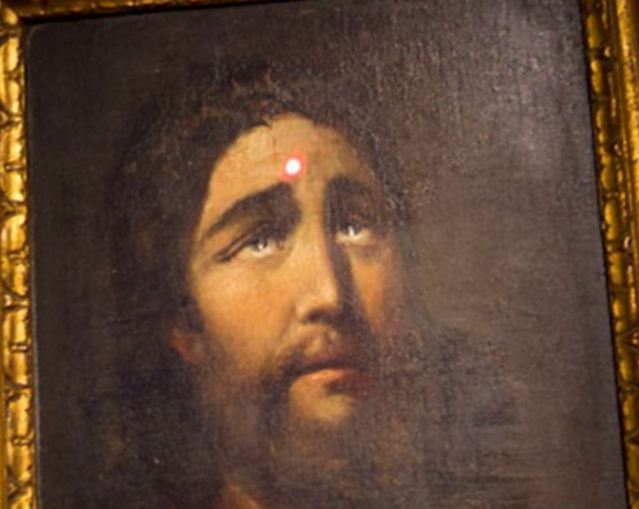 This painting in Banksy’s hotel should be seen in the context of ongoing efforts by activists, PA government officials (and even some journalists) to cast Jesus as an early “Palestinian”.

This narrative, notes CAMERA’s Tricia Miller, ignores the fact that Jesus was the son of a Jewish mother and celebrated Jewish festivals annually in Jerusalem and “in spite of the reality that the geographical designation of ‘Palestine’ did not exist during the lifetime of Jesus”.  However, there’s something much darker than mere biblical and historical revisionism.  The image would also likely evoke – for some Christians – the deicide charge (the antisemitic libel that Jews killed Jesus).  Miller characterised the toxic Palestinian narrative thusly: “Just as first century Jews persecuted Jesus, the Jewish State now persecutes Palestinians, the purported descendants of Jesus”.  As CAMERA’s Christian Media Analysis Dexter Van Zile argued, in the context of Christian-Jewish relations, visual language which plays upon the deicide charge (which has preceded and justified the killing of Jews for nearly two millennia) “is the equivalent of a noose hanging from a tree in the Old South”.

Let’s also recall that the Working Definition of Antisemitism, recently adopted by the British government, characterises the following as antisemitic:

Using the symbols and images associated with classic antisemitism (e.g., claims of Jews killing Jesus or blood libel) to characterize Israel or Israelis.

Whilst nobody familiar with Banksy would be surprised by his use of imagery associated with classic antisemitism, it’s troubling that journalists who pride themselves on critically (and morally) scrutinising every Israeli claim and statement didn’t challenge the pro-Palestinian artist when he floated the risible assertion that his latest project was designed merely to promote dialogue.