Gilad Atzmon said “’Raus” as I left the room and then turned around to the Jewish students at the back and said “being chucked out for causing trouble, just like you lot were in Germany”.

Written by Jonathan Hoffman and originally published at United with Israel 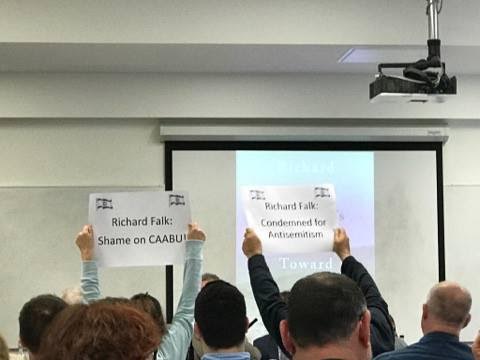 Falk predictably championed the paper that was removed from the UN website –its removal was a sign that Israel and her supporters “no longer want to argue on substance”. He talked about the “changing dynamics of Zionist ambition” – it used to be “limited” but now all Israelis refer to “Judea and Samaria not the West Bank, to underline the Biblical claim.” They have a “sacred relationship to the land” which “doesn’t rely on international law or colonialism – unlike any other claim in the world”. “Israel’s push back has increasingly relied on playing the antisemitic card.” “A smear tactic designed to avoid proper discussion.” “It is a test of academic freedom”.

Chris Doyle of CAABU also spoke. He played ‘good cop’ to Falk’s ‘bad cop’, saying he would not have endorsed Atzmon’s “The Wandering Who”, like Falk did.

In the Q+A 4 or 5 of us managed to speak. I asked Falk about his publication of an antisemitic cartoon in 2011,  showing a dog wearing a kipa (a Jewish head-covering) urinating on a depiction of justice and devouring a bloody skeleton.

UK British Prime Minister David Cameron “strongly condemned” it as did UN High Commissioner for Human Rights Navi Pillay. He said he had withdrawn it quickly when he realised the true nature of it. He was asked about 9/11 conspiracy theories and a South African lady told him that nothing in Israel resembled ‘apartheid’

As Falk started his summing-up two of us held up signs in a silent protest. One sign said “Richard Falk: Shame on CAABU”, the other “Richard Falk: Condemned for Antisemitism”. There were several security guards in the room and one came and ripped up my sign even though it was a silent protest – I will be complaining. I then held up a sign saying “Richard Falk: Shame on LSE”. The meeting became rowdier and Mary Kaldor the Chair asked for the two of us to leave (apparently we were holding the signs too high…)

The Q+A was vile. One student got up and walked out upset. A man near the back of the room kept interrupting speakers, saying how awful Zionists were. Students at the back challenged him and then the man physically threatened them. Security surrounded him but didn’t remove him.

As I left the room, I held up my Israel flag. Our departure caused chaos with people complaining that silent protesters were being removed. Gilad Atzmon said “’Raus” as I left the room (it is on film though I didn’t hear it).  He was admonished by the pro-Palestinians.  Atzmon then turned around to the Jewish students at the back and said “being chucked out for causing trouble, just like you lot were in Germany”.  The pro-Israel people then went ballistic at him and asked him to repeat it – which he happily did. Security was called to remove him – even the pro-Palestinians told him he had crossed a red line. Then (I was told – I was outside) the event descended into chaos as Security refused to remove Atzmon. It ended earlier than the 90 minutes planned.

Appalling. This was an official LSE event – not a student society one. Silent protesters are expelled but a vile anti-Semite is allowed to stay. Shame on LSE – and I speak as an Alumnus.