The BBC World Service amplified claims from an anonymous 'mother of a Palestinian inmate' without disclosing who the prisoner is and the act of terrorism he committed.

As noted in a recent post, the April 17th edition of the BBC World Service radio programme ‘Newsday’ included a monologue from a person described as “the mother of a Palestinian inmate”. The monologue was also promoted to the BBC World Service Twitter account’s 303,000 followers and those who listened to the clip heard the following in a voice-over: 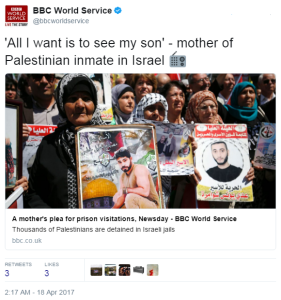 “I haven’t seen or visited my son for around maybe ten months. Israeli security won’t let me see him. When I used to visit Diya I felt as if I owned the world. Every visit request I put in only comes back with rejection, rejection, rejection. I’m 67 years old. What risk am I to Israel’s security? I am of no danger. All I want is to see my son, to check on him and he can check on me. This is all I want but they deprive even a mother from seeing her son and a son from seeing his mother.”

While BBC audiences are no strangers to the promotion of pathos-rich stories from the elderly mothers of convicted terrorists, the fact that listeners were not told who the speaker is or why her son is in prison and did not hear any response to her allegations from the Israeli authorities obviously does not inspire confidence in the BBC’s commitment to impartial reporting of this story.

So who is this “mother of a Palestinian inmate”? A clue to that question comes in a video that appears on the BBC Arabic website and is also embedded in an Arabic language article titled “More than a thousand Palestinian prisoners in Israeli jails begin hunger strike” that, like its English language equivalent, promotes the notion that Palestinian “detainees” might be seen as “political prisoners”.

The woman extensively profiled in that BBC Arabic video is called Najat al Agha and she lives in Khan Younis in the Gaza Strip. Mrs al Agha is by no means publicity shy: she recently told a very similar story to the one promoted by ‘Newsday’ to ‘Amnesty International’ which, predictably, is supplying publicity for the current Fatah hunger strike.

“Najat al-Agha, a 67-year-old woman from Khan Younis in the Gaza Strip, told Amnesty International that her son, Dia al-Agha, 43, has been imprisoned in Israel for the past 25 years. At the age of 19 he was sentenced to life in prison after being convicted on murder charges.  He is being held in Nafha prison in Mitzpe Ramon in the south.

“I don’t know why I get rejected. I am 67 years old. What security threat am I to Israel? All I want is to see him and make sure he is well. I don’t know how long I will live, any visit can be my last. I am scared of dying without seeing him,” his mother said.

“Every time I apply for a permit I get rejected. It is almost a year that I haven’t seen my son, it is devastating. They are punishing us, they are trying to break us.””

Moreover, Najat al Agha – who actually has had two sons serve time in prison in Israel – appears to come forward to tell her story quite frequently and – perhaps not unrelatedly – has been the recipient of ‘honorary gifts’ from the Palestinian Authority and the PLO.

The son she names in the ‘Newsday’ clip is Diya Zakariya Shaker Al-Agha “Al-Faluji”. He was convicted of the murder of Amatzia Ben Haim from Kibbutz Yad Mordechai in a greenhouse in Ganei Tal in October 1992. 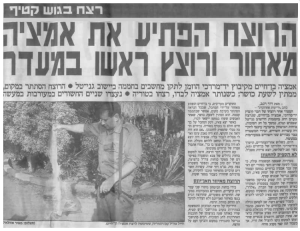 “…Amatzia worked as an engineer in the fledgling electronics factory of the kibbutz. The final product was a computer controlled irrigation and liquid fertilization system sold to farmers who owned greenhouses, small plots of land, who grew tomatoes, peppers, strawberries, and flowers.

Amatzia would go to these farms, install the systems, and often go back to maintain them or to troubleshoot them if needed.  Some of these farms were in the Gaza Strip, prior to the Israeli evacuation of all farms and settlements in Gaza.

It was on one of these trips that Amatzia was helping one such farmer in the Gaza strip, focused entirely on an irrigation line that may have been clogged, or a computer lead that may have malfunctioned. He did not pay attention to the young teen working nearby with a hoe, weeding the furrows. It was to be Amatzia’s last day on earth, as the teen brought the hoe down on Amatzia’s head, killing him instantly, widowing Amatzia’s wife, and orphaning his children.”

A media organisation truly committed to accurate and impartial journalism would of course have provided its audiences with information concerning the “Palestinian inmate” and the act of terror he committed. The BBC World Service, however, chose to give completely context-free amplification to his mother’s claim that Israel is ‘depriving’ her of seeing her son, without any mention of the fact that her son deprived three children – the youngest of whom was only five years old at the time – from ever seeing their father again.

That, of course, is not accurate and impartial journalism but self-conscription to a political campaign.

The BBC, the elderly mothers of convicted terrorists and Twitter