What did the BBC omit from its report on Marwan Barghouti's 'hunger strike' snacks? 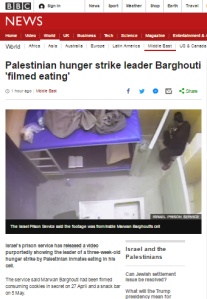 “Israel’s prison service has released a video purportedly showing the leader of a three-week-old hunger strike by Palestinian inmates eating in his cell.

The service said Marwan Barghouti had been filmed consuming cookies in secret on 27 April and a snack bar on 5 May.”

The article gives generous amplification to statements from interested parties and even before they clicked on the link, BBC audiences were informed that ‘Marwan Barghouti’s wife says the surveillance footage released by Israel’s prison service is “fake”‘.

“Barghouti’s wife said the footage was “fake” and intended to break the morale of the hunger strike’s participants. […]

The head of the Palestinian Prisoners’ Club, Qadoura Fares, called the video a fabrication, stressing Barghouti was being held in solitary confinement at Kishon prison and had no access to food.

“This is psychological warfare that we expected Israel to wage against the strike,” he was quoted as saying by the Associated Press.

Barghouti’s wife, Fadwa, said Israel was “resorting to despicable acts” and warned that they would “increase the prisoners’ insistence on continuing”.”

Previous BBC reports on the story of the hunger strike that commenced on April 17th told BBC audiences that “More than 1,000 Palestinians held in Israeli jails have begun a mass hunger strike against detention conditions”.

In this article readers are told that:

“More than 890 prisoners have been refusing food since 17 April in protest at conditions in Israeli jails.”

They are not however informed that Israeli officials put the number of striking prisoners at around 800 and that participation fell after some dropped out.

Neither are BBC audiences reminded that this is not the first time that Barghouti has been caught eating during a supposed ‘hunger strike’.

“In 2004, the prison service published still shots allegedly showing Barghouti furtively eating food in his cell during a previous hunger strike. Those photos were taken with a hidden camera through a hole in the wall of his cell.”

While this article promotes the claim that the hunger strike is a protest against “conditions in Israeli jails”, once again readers are not informed of the political background to the story and its connection to internal Fatah power struggles.

With regard to Barghouti himself, readers are told that he “was convicted on five counts of murder by an Israeli court in 2004” and that:

“Barghouti is the former leader of the Fatah movement in the West Bank and chief of its armed wing, the Tanzim.

His trial during the second Palestinian intifada, or uprising, turned him into household name and he enjoys widespread support among many Palestinian factions.

The 57-year-old has been touted as a possible successor to Palestinian President Mahmoud Abbas.”

Remarkably – yet unsurprisingly – the BBC refrains from informing readers that groups that Barghouti headed and founded engaged in terrorism under his leadership and that the “five counts of murder” for which he was convicted were terror attacks. The sole use of the word ‘terrorists’ in this report comes in a quote from an Israeli minister.

Identifying the BBC’s anonymous “mother of a Palestinian inmate”