BBC Radio 4 tells British audiences what is the 'root cause' of terrorism on their streets.

The June 6th edition of the BBC Radio 4 “analysis of news and current affairs” programme ‘World at One’ included an item (from 53:36 here) that is remarkable for its blatant and transparent attempt to shape audience opinion. 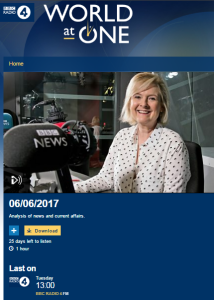 Presenter Martha Kearney began by establishing her interviewee’s credentials – clearly signposting to listeners that the views they were about to hear should be considered expert and authoritative.

Martha Kearney: “Now in the aftermath of the attacks in Manchester and London there’s been a lot of debate about what role Islam has played in the radicalisation of the men who carried out the terror attacks. I’m joined now by Karen Armstrong; considered to be one of the world’s leading writers on religion. She’s just won the Princess Asturias Award for social sciences – congratulations.”

MK: “Ahm…obviously this is a hugely complex issue but, you know, when you have a father of two young children deciding to stab strangers in the street it’s extraordinary. How do we begin to look at the root causes of an action like that?”

Armstrong responded by telling audiences what, in her ‘expert’ view, is not the cause of terror attacks in the UK and other Western countries.

KA: “Ah well the first thing we have to do is not to jump to the easy answer and just dump it all on Islam. I am extremely worried about the rise of Islamophobia in Europe and in the United States. I’ve just come back from Prague where I was addressing young people who’ve…they’ve got a very small Muslim population, they’ve suffered no terrorist attacks but their vicious attacks on Islam are…it was frightening. We’ve got a bad history with our…”

MK [interrupts]: “Certainly and I’m sure obviously, you know, mo…well everyone…well…well a lot of people would certainly condemn Islamophobia but what relationship do you think that Islam has in terms of radicalisation?”

Listeners then heard a decidedly bizarre interpretation of the ideologies behind the Islamic State group – despite the rather obvious clue in the group’s self-chosen name.

KA: “Ah…Islam itself is…what we’re seeing is a ghastly perverted form of Islam, just as you see a perverted form of Christianity in the Ku Klux Klan, and mixed up with some debased secularism. IS, for example…its leaders are…were members of Saddam’s disbanded army so they are secular socialist Baathists. Ahm…and ah…oh I think someone spoke to the BBC a little…just a few months ago – an IS supporter – who said he’d not been attracted by the religious message of IS but by its political agenda; that it was offering an alternative to the autocratic states in the region, many of which have been aggressively supported by the West. So what we’ve got here is an amalgam – a horrible cocktail, as I say, of really bad religious…religious ideas mixed up with some not very good secular ideas.”

MK: “So how can that be countered? The Archbishop of Canterbury, Justin Welby, was saying, I think just yesterday, we’ve got to say that if something happens within our own faith tradition, we need to take responsibility for countering that – so by implication, the Muslim community, Muslim faith leaders.”

Brushing aside the many examples of extremist organisations, institutions and preachers that have had a free run in the UK and elsewhere for years, Armstrong went on:

KA: “Yes well they are. But of course the Muslim faith leaders are not behind this. These young people are very often getting radicalised online.”

MK: “Not behind it – but what should they be doing to counter it?”

KA: “Well they’re doing their best but I think they need some backing from the mainstream. There’s plenty of data out there that should be shared repeatedly with the general public. For example a huge poll undertaken by Gallup in 35 Muslim-majority countries asked whether the 9/11 attacks were justified. 93% said no they were not and the reasons they gave were entirely religious. The 7% who said yes, their reasoning was entirely political and this kind of data should be being shared repeatedly with the general public.”

MK: “So what would your advice be to Western governments who are now facing growing threats, radicalised populations?”

The item then got to its take-away point. Having spent nearly four minutes telling the BBC’s domestic audience that terrorism in Manchester and London has nothing to do with Islam and Muslim faith leaders, Armstrong left them with her ‘authoritative’ answer to the question of what is the “root cause” of such horrific attacks.

KA: “This is a really frightening moment for us and one of the things that’s happened is that the state has lost the monopoly of violence. States have always had to control the violence of society in order to rule but, starting with the French revolution, they began to lose that. And now, with the ease of travel and modern communications, ahm…a car can become a lethal weapon. Ahm…and so this is a moment when we have to reassess things; not just jump for an easy scapegoat like Islam or Islamic faith leaders. I think we all have to look and also realise that a lot of discourse about these attacks – saying they’re against our democracy – I don’t think that’s the issue at all. I think one of the main issues – ah…and this has been done…proved by surveys – is that the extremism is largely fuelled by images of Muslim suffering round the world. That has been so from the 1980s when people were radicalised in Saudi Arabia by looking at the hideous pictures coming from…ah…the camps – the Palestinian camps…”

Martha Kearney jumped in with clarification designed to drive home the point:

KA: “Yes, in Gaza and so on. And they come every day and that is one of the main triggers to extremism.”

MK: “Karen Armstrong; thank you very much indeed for coming to the studio to discuss this.”

So there we have it. BBC Radio 4 has brought in an ‘expert’ to tell British listeners that the real reason British citizens are being indiscriminately murdered on the streets is because the terrorists are radicalised by seeing “hideous” images from Gaza.

And of course BBC audiences have in the past been told so often who is ‘responsible’ for those “hideous” images that there is no need to even mention the ‘guilty party’ by name in this transparent exercise in dog-whistle propaganda.