Once again a Gaza terror tunnel is not newsworthy for the BBC.

Hamas’ efforts to rebuild the network of cross-border attack tunnels destroyed in 2014 and the terrorist organisation’s related misappropriation of construction materials intended for the rebuilding and repair of civilian dwellings are topics which have been serially under-reported throughout the three years since that conflict took place and over a year has passed since the BBC last produced any coverage of that subject.

Another such story recently emerged when a tunnel was discovered in the Maghazi district of the Gaza Strip. 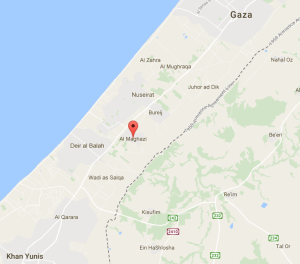 “The tunnel was discovered by workers of the United Nations Relief and Works Agency for Palestine Refugees in the Near East (UNRWA) on June 1 under two schools in the Maghazi refugee camp in the Gaza Strip near the city of Deir al-Balah. […]

The tunnel, between two and three meters underground, passes under the Maghazi Elementary Boys A&B School and the Maghazi Preparatory Boys School, and was built both westward into the Palestinian enclave and eastward toward the security fence with Israel, according to UNRWA.

UNRWA spokesman Christopher Gunness said Friday that the tunnel “has no entry or exit points on the premises nor is it connected to the schools or other buildings in any way.”

“UNRWA condemns the existence of such tunnels in the strongest possible terms. It is unacceptable that students and staff are placed at risk in such a way,” he said.

Gunness said the agency had “robustly intervened and protested to Hamas in Gaza”.

He said UNRWA will seal the tunnel, which was discovered while the schools were empty during the summer holiday.

Hamas, for its part, denied that it or any other terror group built a tunnel under the two UN schools. The organization on Friday “strongly condemned” the UNRWA revelation, saying it would be exploited by Israel to “justify its crimes.”

The terror group denied it built the tunnel and said it had clarified the issue “with all factions and resistance forces, who clearly stated they had no actions related to the resistance in the said location,” the movement said, adding that it respected UNRWA’s work.”

Despite the discovery of weapons in UNRWA schools and the firing of missiles from such locations during the 2014 conflict as well as the recent scandals (unreported by the BBC) concerning Hamas and UNRWA staff, the BBC’s Gaza bureau has to date shown no interest in reporting this story (of which its staff are obviously aware), let alone in investigating how a tunnel beneath two schools could have been constructed apparently under the noses – and ears – of UNRWA employees.