Episode 10 of Jeremy Bowen’s BBC Radio 4 series ‘Our Man in the Middle East’ was broadcast on May 26th. Titled “The Nearness of Death“, the programme is described in the synopsis as follows:

“Jeremy Bowen describes the incident as the worse [sic] day of his working life – the day he and his colleagues came under fire from the Israeli Defence Force. Bowen’s driver Abed Takkhoush was hit when the crew of an Israeli tank fired a shell across the border wire into Lebanon. It hit the back of his Mercedes taxi while he was sitting in the driver’s seat phoning his son.” 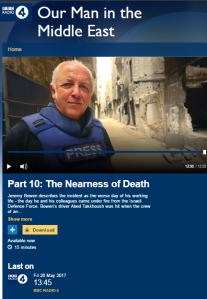 Bowen has of course publicly revisited that incident on numerous occasions in the past (see ‘related articles’ below) but this programme once again provides insight into the approach taken by the man the BBC chose to be responsible for all its Middle East coverage twelve years ago.

In this report, Bowen’s scene-setting fails to provide listeners with any background information or context concerning the reason why the Israeli army was in Lebanon in the first place and he fails to clarify that Hizballah did not only act against – or because of – Israeli forces.

“We were looking forward to the day ahead down south on the border with Israel. It was a big story. The Israelis were ending an occupation of a broad swathe of South Lebanon that had lasted 18 years. They’d been driven out by an insurgency mounted by Hizballah – the Shia Muslim militia that head become a highly effective guerilla force with the help of Iran and Syria.”

Later on Bowen tells listeners that:

“By the mid-90s the main fight was in south Lebanon between the Israeli occupiers and Hizballah. Israel claimed self-defence and called Hizballah terrorists. Hizballah regarded themselves as a legitimate resistance to occupation and so did most Lebanese.”

Bowen refrains from explaining why there was no Hizballah ‘resistance’ to the Syrian occupation in Lebanon or to inform listeners of the 1989 Taif Agreement and the fact that under that agreement, all militias – including Hizballah – were supposed to have been disarmed and disbanded.

Although in previous accounts Bowen has said “I’d been talking to my literary agent on the phone” at the time of the incident in which his driver was killed, in this programme his version is slightly different.

“The big mistake I made was deciding to stop to do a piece to camera overlooking an Israeli village. I discovered later that journalists and Israeli civilians were watching from a picnic spot as I got out of the car with Malik. I thought we were safe where we were but I didn’t realise that an Israeli battle tank had us in its sights.” […]

“I said to Malik ‘let’s get up there to help him’. Malik’s face was contorted. ‘No’, he said, ‘don’t do it. Abed is dead; he can’t have survived that and if you go up there too, they’ll kill you’. When cautiously I moved towards Abed’s body I heard bullets fizzing over my head and ducked back into cover. A team from the Times later said they heard the tank crew saying on the radio that they’d get the other two with the heavy machine gun. I’ll feel guilty till my last day that we stopped to film there.”

“We joined a UN convoy that was trying to reach besieged civilians. The Israelis turned it back with some heavy shelling.”

“Once, the Israelis were shelling the coastal highway from a war ship to stop people getting to southern Lebanon.”

And – while failing to clarify that the two-week Israeli operation in Lebanon in 1996 came after Hizballah shelled Israeli communities, injuring dozens of civilians:

“106 civilians were killed in a single incident in 1996 by Israeli shelling. They’d been sheltering in a UN peace-keeping base in a village called Qana in south Lebanon. Hundreds more were wounded. The UN didn’t accept Israel’s explanation that Hizballah had fired Katyusha rockets at them from close to the base. I’d been in a briefing in the Israeli Defence Ministry that claimed they knew everything that went on in south Lebanon but that day they said they didn’t know they were killing civilians even when UN liaison officers begged them to stop.”

Bowen goes on to use language that does not adhere to BBC editorial standards of impartiality.

“Qana’s dead were buried together. At the funeral I met Hassan Balhas; a young man who’d been left paraplegic by a stray Israeli bullet. 35 members of his family were killed in the massacre.” [emphasis added]

Listeners are also told by Bowen that:

“I’ve been to the homes of Israelis killed by Lebanese and their families’ grief is tragic to see. But there’s been just so much more of it in Lebanon where civilians have suffered disproportionately at the hands of Israel.” [emphasis added]

Going back to the May 2000 incident, Bowen tells listeners that his driver:

“…did stop four years later on the day the Israeli army killed him. The Israeli military said the tank fired at us because they thought we were terrorists. That wasn’t the first assumption of Israeli civilians who were watching from their side of the border whose reaction was caught in video collected by a BBC investigation into Abed’s death.”

Listeners then hear an unidentified voice explaining that video.

“People are now saying in Hebrew this car was shot, it was shot from here. Some civilian is saying ‘they hit a civilian car – we’re going to have Katyushas now’. ‘This is very bad’, he’s saying.”

In fact, the Hebrew speaker is not heard using the term “civilian car” but the word “vehicle”. Bowen goes on:

“I went to see a general in the Defence Ministry in Tel Aviv. He asked for some understanding. ‘Look’, he said, ‘there were young boys in that tank and they’d been warned they might be attacked by terrorists. They were scared’. I wasn’t very sympathetic. They were in a tank and we were civilians.”

Bowen has of course told that part of the story before too and is on record as refusing to accept the results of the IDF investigation into – and apology for – the tragic incident. Hence, seventeen years on the BBC’s Middle East editor is still using his position to promote the notion that it was impossible for Israeli soldiers to mistake three men travelling in a war zone in a car with Lebanese plates, and carrying camera equipment, for Hizballah terrorists dressed – as was very often the case – in civilian clothing.

He then closes the item with an oblique, but clear, insinuation:

“Fighters in every war, on every side, dehumanise their enemies. They regard them as something less that living and breathing people who can feel love and fear and happiness. That way, it’s much easier to kill.”

Jeremy Bowen will no doubt continue his efforts to promote his version of this story for as long as the BBC and additional media outlets continue to provide him with the platform to do so. Nevertheless, it is worth bearing in mind that the man who repeatedly tells that story from that particular angle is also the person who for the last twelve years has been entrusted with ensuring that what BBC audiences are told about Israel meets editorial standards of accuracy, impartiality and objectivity.

BBC’s Bowen on CAMERA complaint result: still ‘indignant’ after all these years