The BBC once again reports a BDS related story without clarification of that campaign's aims.

On July 12th a link to an article by BBC Music’s Mark Savage appeared on both the Middle East and Entertainment and Arts pages of the BBC News website under the heading “Radiohead continue to defend Israel gig”.

That link leads to an article headlined “Radiohead on Israel gig: “Playing a country isn’t the same as endorsing its government”” which opens:

“Thom Yorke has continued to defend Radiohead’s decision to play a concert in Israel.”

BBC Music has been promoting this story since February when it also amplified (albeit with inaccuracies) the efforts of supporters of the BDS campaign calling themselves ‘Artists for Palestine UK’ – including Roger Waters – to get Radiohead to cancel their upcoming concert in Israel. Fifty-five words of this 642 word report are similarly dedicated to amplification of that group including – once again – a link to its website.

“In April, the group were [sic] petitioned by Artists For Palestine, who asked them to reconsider performing in a country “where a system of apartheid has been imposed on the Palestinian people”.”

A further 54 words describe a “protest” by a small number of BDS campaign supporters in Scotland at a recent Radiohead show.

One hundred and sixty-seven words (26%) of the article and a link are dedicated to amplification of efforts by Ken Loach to persuade Radiohead to cancel their Tel Aviv appearance. That generous exposure is perhaps more comprehensible when seen in the context of the BBC’s decision last month to mark Loach’s birthday with a Tweet and a re-promoted blogpost highlighting his “strong ties to the BBC”. 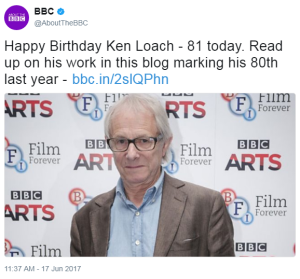 “None of us want to see them make the mistake of appearing to endorse or cover up Israeli oppression. If they go to Tel Aviv, they may never live it down.”

Loach continued: “I don’t know who is advising Radiohead, but their stubborn refusal to engage with the many critics of their ill-advised concert in Tel Aviv suggests to me that they only want to hear one side – the one that supports apartheid.””

With a total of 276 words assigned to amplification of those protesting Radiohead’s show in Israel and 256 words allotted to a member of the band’s reaction to those calls, the article’s remaining 110 words are devoted to BBC supplied background to the story.

As usual in BBC content relating to this topic, that ‘background’ does not however include an explanation of the BDS campaign’s aims and agenda and Mark Savage does not provide any factual information that would enable audiences to put the unchallenged allegations – such as “human rights violations”, “oppression” and “apartheid” – made by the showcased BDS supporters into their correct context.

“The band have [sic] repeatedly been urged to call off the show as part of a cultural boycott over Israel’s policies towards the Palestinians. […]

Radiohead have performed in Israel eight times – most recently in 2000 – but next week’s show is the first time they’ve visited since the BDS (Boycott, Divestment and Sanctions) movement began in 2005.”

As readers may recall, two years ago the BBC claimed that it is not its job to inform audiences what the BDS campaign is actually all about when reporting on related stories. More recently, the BBC has taken to bizarrely describing that campaign to eradicate Jewish self-determination as a “human rights group”.

Clearly though, BBC audiences cannot make up their own minds about Radiohead’s response to calls to join the boycott against Israel if they are not given the full information concerning that boycott campaign’s ultimate aim.