The BBC's response to a complaint about a recent edition of 'Dateline London' stops halfway. 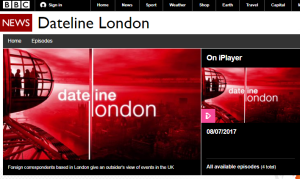 Ramdani: “I think this is also to do with an arms race and I think [Indian PM] Modi’s visit to Israel testifies to that. To me it’s another example of a populist global leader who’s trying to humiliate millions of Muslims around the world, not only in his own country but also in neighbouring Pakistan. He wants to portray them as the enemy within but also one that threatens externally and instead of conciliation and indeed resorting to democracy, he’s…he sees the future in a constant arms struggle with his side being armed to the teeth and ready to dispatch [kill] as many Muslims as possible when trouble arises. And this I would call it the Israeli model and this is why Modi has chosen to actually break decades of overt Indian support for the Palestinian cause and indeed decided to paly up [sic: pal up] effectively with a notorious far-right hawk like Benjamin Netanyahu. And his behaviour in Israel included snubbing Palestinian leaders – not least of all Mahmoud Abbas – but also stocking up with weapons. And frankly I found it quite outrageous that a leader like Modi chooses to side with the State of Israel which stands accused…which regularly breaches international and humanitarian laws and whose leaders past and present stand accused of war crimes and who constantly expand its illegal colonial entity. I found this quite distasteful.”

Those slurs went completely unchallenged by both the additional guests on the panel and, more importantly, the programme’s host Jane Hill – who instead promptly redirected the conversation to the topic of her contributors’ holiday plans.

A member of the public who submitted a complaint to the BBC on that issue received a reply that includes the following: [emphasis added]

“Thank you for contacting us about Dateline London broadcast on 8th July.  We appreciate that you were unhappy with comments made by one of the panellists.

Dateline London is a programme in which the panellists represent a wide range of views and perspectives. They are free to express their opinions, often forcefully, during the programme, and in return have those views robustly challenged by the presenter and their fellow panellists. In this instance, we accept that a panellist made some contentious comments in the final answer on the penultimate subject in the programme – and that these remarks went unchallenged.

The programme works to a fixed duration, and at the time the focus was on ensuring the final subject could be discussed in the short amount of time available. We have spoken to the production team and presenter to remind them of the need to ensure that any contentious remarks are challenged and questioned, at whatever point they are made during the programme.”

Ramdani’s “comments” were of course not merely “contentious”: her claims were first and foremost untrue and therefore misleading to audiences. Remarkably, the response from BBC Complaints does not clarify how the BBC intends to make sure that viewers who watched that programme will be relieved of inaccurate impressions propagated by the falsehood that Israel kills “as many Muslims as possible”, the lie that Israel “constantly expand[s]” or the fabrication that it is “illegal” and “colonial”.

Neither does the response explain why BBC staff should need to be ‘reminded’ of existing editorial guidelines.