A BBC backgrounder on the latest violence in Jerusalem sells audiences short.

On June 20th the BBC finally broke its silence on the topic of the faux outrage at the security measures installed after the July 14th terror attack in Jerusalem when the BBC News website published a filmed backgrounder that was billed on its Middle East page as “Holy site metal detector row explained”.

“There is anger over security at the Jerusalem holy site where two Israeli police officers were killed.”

The video includes both text and commentary from the BBC Jerusalem bureau’s Yolande Knell – but does it really explain the issue comprehensively, accurately and impartially? The backgrounder opens:

Text: “What started the latest tensions over Jerusalem’s holy site? Protesters are furious with Israel for tightening security at one of Islam’s holiest places.”

The fact that Temple Mount is the holiest site in Judaism is not mentioned.

Knell: “For Palestinians, anything seen as a threat to al Aqsa mosque is a rallying cry and a symbol of Israel’s occupation.”

While Yolande Knell amplifies the baseless propaganda concerning “a threat to al Aqsa mosque”, she does not bother to inform viewers that in fact, no such threat exists.

Text: “Israeli soldiers are responding with tear gas. Unusually, Israel closed the site after two of its police officers were shot dead by armed men inside the mosque grounds.” 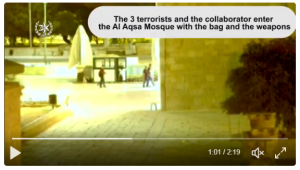 The backgrounder does not clarify that the incident (that took place at Lions Gate rather than “inside the mosque grounds”) in which the two Israeli police officers were murdered was a terror attack. Critically, viewers are not told that the terrorists used weapons that they received from an accomplice inside al Aqsa mosque. Without that crucial information, BBC audiences obviously cannot understand why the metal detectors were subsequently installed.

Knell: “Now the gate to the al Aqsa mosque compound is open once again but to reach it you have to pass through one of those metal detectors. Israel says it’s a safety issue. Palestinians say until those are removed, they’re going to pray outside.” [emphasis added]

Knell does not clarify that some worshippers are not heeding the call to pray outside and have been using the mosque as usual despite the metal detectors. Neither does she tell BBC audiences that the call to boycott the mosque was actually put out by the Jordanian Waqf. Viewers are not told that non-Muslim visitors to the site (entering via the Mughrabi Gate) already pass through metal detectors, as do all visitors to the Western Wall.

Text: “Why does the site matter? This is a holy site for Muslims, Jews and Christians. Jews call it Temple Mount – the site of two biblical temples. They can visit – but cannot pray. Could the violence escalate? Yes. Washington supports Israel’s response but there’s been criticism from the wider Islamic world.”

BBC audiences are not given the context that is the long history of Palestinian and Arab incitement using the al Aqsa mosque as a pretext for violence. Neither are they informed that previous internationally brokered attempts to improve security at the site and prevent the exploitation of al Aqsa mosque for violent ends were scuppered by the Palestinians.

This story is of course about far more than the installation of a few metal detectors of the type seen at places – including Muslim holy sites – all over the world. Rather, the latest contrived “row” is just one more attempt by Palestinian leaders to negate the presence of Jews at their holiest site, using a pretext that those who fabricate the crisis know only too well is bound to trigger violence.

BBC audiences, however, are by no stretch of the imagination being told the whole story.

No BBC News follow up on Temple Mount ‘tensions’ story

Attempts to hobble Temple Mount cameras not news for BBC