The activities of Iran and its proxy in Lebanon and Syria have been under-reported by the BBC.

Last month we noted that BBC audiences had not seen any coverage of the reports that began to emerge earlier this year concerning allegedly Iranian-built underground missile factories in Lebanon.

Reports of a similar project in north-west Syria also came to light in June and began to garner wider coverage in mid-August (though not from the BBC) after satellite images of the site were shown on Israel’s Channel 2. 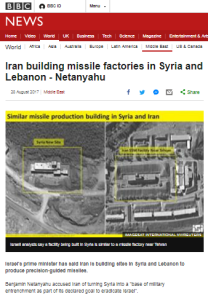 Both those stories unfolded following reports from sources unconnected to Israel but audiences were not informed of that when the BBC’s first mention of either story came in an article published on August 28th under the headline “Iran building missile factories in Syria and Lebanon – Netanyahu“.

Benjamin Netanyahu accused Iran of turning Syria into a “base of military entrenchment as part of its declared goal to eradicate Israel”. […]

Mr Netanyahu gave no details about the sites Iran was allegedly building to manufacture missiles, but he warned “this is something Israel cannot accept”.

Two weeks ago, the Israeli satellite imagery company ImageSat International published photographs it said appeared to confirm a report by a Syrian pro-opposition newspaper that a missile factory was under construction in north-western Syria under Iranian oversight.” 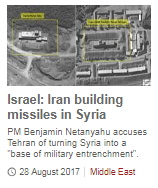 The same article also included the BBC’s first mention in English of a story it reported in Arabic three weeks previously.

“Mr Netanyahu also pressed Mr Guterres [UN Secretary General] on the UN peacekeeping force in Lebanon, Unifil, which Israel alleges has failed to prevent Hezbollah building up its supply of weapons since they fought a war in 2006.

Mr Guterres promised to “do everything in my capacity” to ensure Unifil fulfilled its obligations.

“I understand the security concerns of Israel and I repeat that the idea or the intention or the will to destroy the state of Israel is something totally unacceptable from my perspective,” he added.

Unifil’s mandate is up for renewal at the end of the month.”

Readers are not however told that earlier this month, Mr Guterres himself called for all non-state actors in Lebanon to be disarmed in accordance with UNSC resolution 1701 – including the terrorist militia that the BBC euphemistically portrays in this article as “Lebanon’s Hezbollah movement”.

As regular readers know, BBC audiences are chronically deprived of information concerning Hizballah’s violations of UN Security Council resolution 1701 and so they are obviously not fully aware of the context to what the BBC describes Israeli ‘allegations’ concerning UNIFIL’s record.

While these stories have now finally received some brief BBC coverage in the English language, if audiences are to “engage fully” with the issues they raise as pledged in the BBC’s public purposes, they are clearly in need of much more background information.

Another UN SC resolution violation goes unreported by the BBC

BBC News yawns over another violation of UNSC resolution 1701

Will the new man in Beirut improve the BBC’s record of reporting?