It’s difficult to know which is worse about this Daily Mirror photo essay: the fact that they completely obfuscated the terror dimension of Gaza’s tunnels, glorified Hamas’s abuse of children or unethically used four-year old photos while presenting them as current.

On Sept. 2nd, Daily Mirror published a photo essay on the “tunnel children” of Gaza, “brave youngsters” who, we are told, keep the economy in the strip going.

Though most don’t typically turn to the British tabloid for hard ‘news’, the piece, by Tom Howell, doesn’t adhere to even the most minimum standards of accuracy, and is in fact more akin to Hamas propaganda than anything resembling journalism.

For starters, it completely ignores the use of such tunnels by Hamas for terror purposes.  It also perversely describes Hamas’s illegal use of child labor in these tunnels as something noble, rather than the cynical exploitation of young boys by a terrorist organization. 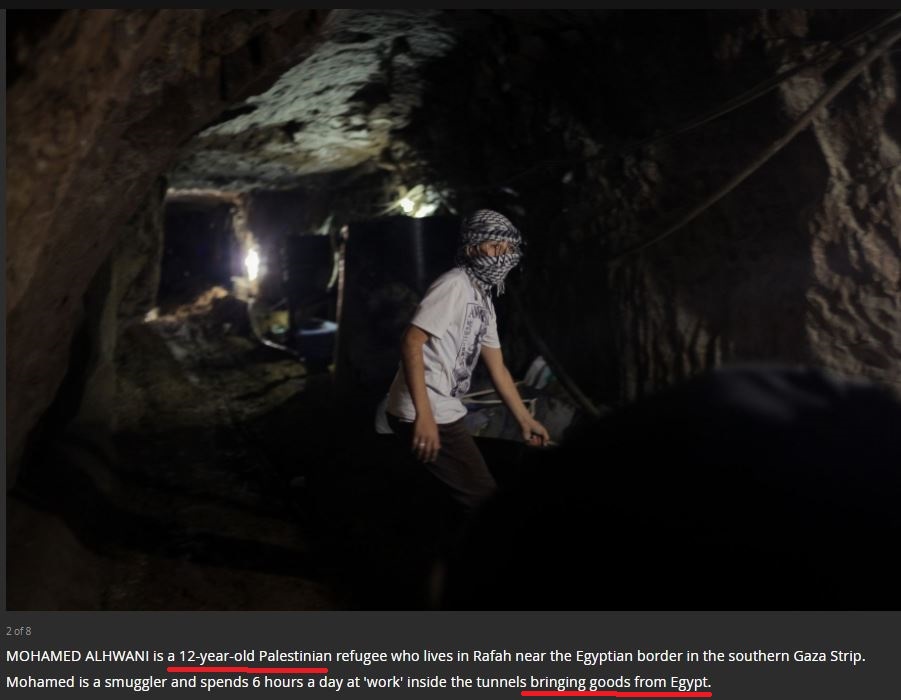 The piece is also in some sort of time warp, as Egypt closed all but a few of the smuggling tunnels in 2013 and 2014, flooding most of them with raw sewage, collapsing what was known as the “underground Gaza economy”.  Sure enough, when we did a search, it turns out that all of the tunnels in the series were first published in 2013, a fact not revealed by editors.

In fact, one of the captions was copied almost word for word from a 2013 Reuters story. See this caption which appeared beneath another Daily Mirror photo of a child working in the tunnels.

It was taken almost word for word from this passage in a 2013 Reuters report:

The network of tunnels is a vital lifeline for Gaza, bringing in an estimated 30 percent of all goods that reach the enclave and circumventing a blockade imposed by Israel for more than seven years.

All editors did was remove the words “for more than seven years”, which of course served to hide the fact that the report and photo is four years old.

It’s difficult to know which is worse: the fact that they completely obfuscated the terror dimension of Gaza’s tunnels, glorified Hamas’s abuse of children or unethically used four-year old photos while presenting them as current.

We’ve contacted editors at Daily Mirror to complain. We also tweeted the journalist:

.@thowell0678 Hi. Your photo essay uses pics that are from 2013 yet presented as if they are current. See originals: https://t.co/iXlfIOpxrg https://t.co/7v3uhuCjtc