The BBC continues to promote its political narrative concerning Jerusalem. 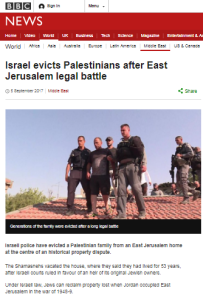 Of the written report’s 491 words, one hundred and eleven are used to describe the events themselves and a further 136 are given over to brief explanation of the legal background to the story, but without clarifying that the property was supposed to be vacated by the Shamasneh family long ago.

“In 2013, the Shamasneh family lost their appeal of the case in the Supreme Court, after lower courts ruled that the land should be restored to its Jewish owner.

But the Supreme Court also deferred any eviction of the Shamasneh family at the time on humanitarian grounds, stating: “It is not easy to evict someone from their residence, particularly when it involves someone elderly who has lived at the property for many years.”

Two and a half years after the eviction date set by the court, legal proceedings against the family were renewed and the family was served with an eviction order.” [emphasis added]

The BBC’s report includes a rare mention of the 19-year Jordanian occupation of parts of Jerusalem.

“Under Israeli law, Jews can reclaim property lost when Jordan occupied East Jerusalem in the war of 1948-9.” [emphasis added]

However, that sentence is followed by a reference to another ‘occupation’ of the exact same location and the BBC fails to provide any explanation for that dissonance.

“Israel has occupied the area since driving Jordan out in a war in 1967.”

Readers find a 21-word reaction from a member of the evicted family and a thirty-six word long comment from the political NGO ‘Peace Now’. The article does not include any response from or on behalf of the property’s owner.

The report correctly explains that the property in question – which is actually located in the Shimon HaTsadik neighbourhood rather than in Sheikh Jarrah as stated – was originally owned by Jews.

“The land in Sheikh Jarrah was originally owned by a family among the thousands of Jews who fled or were expelled from eastern Jerusalem by Jordanian forces in the 1948-9 war.”

The purchase of the land upon which the property was built was made in 1876.

“…in 1876 the cave [of Shimon HaTzadik] and the nearby field were purchased by Jews, involving a plot of 18 dunams (about 4.5 acres) that included 80 ancient olive trees. The property was purchased for 15,000 francs and was transferred to the owner through the Majlis al-Idara, the seat of the Turkish Pasha and the chief justice. According to the contract, the buyers (the committee of the Sephardic community and the Ashkenazi Assembly of Israel) divided the area between them equally, including the cave on the edge of the plot.

Dozens of Jewish families built homes on the property. On the eve of the Arab Revolt in 1936 there were hundreds of Jews living there. When the disturbances began they fled, but returned a few months later and lived there until 1948. When the Jordanians captured the area, the Jews were evacuated and for nineteen years were barred from visiting either their former homes or the cave of Shimon HaTzadik. […]

However readers are – as usual in BBC content – encouraged to view Jewish presence on land legally purchased over 140 years ago as ‘illegal settlement’ and the BBC offers no explanation for its promotion of that incongruous and partial politically motivated narrative.

“The issue of control in East Jerusalem is one of the most contentious areas of dispute between Israel and the Palestinians.

Israel claims the whole of Jerusalem as its capital, while Palestinians want East Jerusalem as the capital of a future independent state.

About 200,000 Jewish settlers and 370,000 Palestinians live in East Jerusalem. Some 2,500 of the more hardline settlers live in buildings bought inside Palestinian neighbourhoods, according to the Israeli anti-settlement watchdog Peace Now.

More than 600,000 Jews live in about 140 settlements in East Jerusalem and the occupied West Bank. The settlements are considered illegal under international law, though Israel disputes this.”

The article also promotes a partisan map credited to the political NGO B’tselem that has been seen many times before in BBC content and which similarly promotes the notion that places such as the Old City, Neve Ya’akov and even parts of Mt Scopus are ‘settlements’ despite the fact that Jews purchased land and lived in such areas long before they were expelled by the invading Jordanian army in 1948.

Further encouragement of audiences to view this as a story about ‘settlements’ is evident in the ‘additional reading’ accompanying this article on the BBC News website’s Middle East page and at the bottom of the article itself. The promoted reports include a BBC backgrounder on ‘settlements’ that first appeared in December 2016 and was subsequently amended four times.

The article closes with the unquestioned promotion of Palestinian messaging:

“Palestinians say the Israeli law allowing Jewish property reclamation is discriminatory since no such law exists for Palestinians, some 800,000 of whom fled or were expelled from what became Israel in the 1948-9 war.”

Not only does the BBC not provide any source for the debatable claim that 800,000 Palestinians became refugees around 1948 but it also fails to inform readers that a larger number of Jews fled or were expelled from Arab and Muslim countries (most of whom found refuge in Israel) and that they have never received compensation for the lands and property they were forced to abandon.

This report propagates the BBC’s usual simplistic narratives on ‘settlements’ and ‘East’ Jerusalem. Inevitably, readers find the standard BBC insert on ‘international law’ – which makes no attempt to inform them of legal views on the topic that fall outside the corporation’s chosen political narrative – and interested parties in the form of campaigning NGOs are repeatedly given uncritical amplification. As ever, that editorial policy fails to contribute to the enhancement of audience understanding of these complex topics.