Did the BBC finally produce some reporting on internal Palestinian affairs? Not really.

As regular readers know, the BBC does not as a rule cover internal Palestinian affairs and so – as was noted here in July – the absence of any reporting on a new Palestinian Authority “Cyber Crime” law came as no surprise.

“The controversial Cyber Crime Law, signed by Palestinian Authority (PA) President Mahmoud Abbas on July 11, permits the imprisonment of Palestinians for “liking” or sharing published material on the internet.

Critics say the law paves the way for the emergence of a “police state” in PA-controlled territories in the West Bank. They also argue that the law aims to silence criticism of Abbas and the PA leadership.

The new law comes on the heels of the PA’s recent decision to block more than 20 Palestinian websites accused of publishing comments and articles critical of the PA leadership.

The law was approved by Abbas himself, without review by the Palestinian parliament, known as the Palestinian Legislative Council (PLC). The PLC has been paralyzed for the past decade, as a result of the power struggle between Abbas’s PA and Hamas — the Islamist movement that controls the Gaza Strip.”

Likewise, the BBC did not produce any English language coverage of the recent spate of detentions and arrests of Palestinian journalists and social media users by both the PA and Hamas.

Visitors to the BBC News website’s Middle East page on September 6th may therefore have been rather surprised to find a highly unusual article with the oddly punctuated headline “Palestinian Authority ‘detains rights activist over criticism’“.

“The Palestinian Authority is reported to have extended the detention of a prominent human rights activist who called on it to respect free speech.

Issa Amro, 35, was detained on Monday by Palestinian Preventive Security in Hebron, in the occupied West Bank.

Palestinian officials have not commented, but a local non-governmental organisation says prosecutors have accused him of “causing strife”.”

However, rather than informing readers of the context to this story in its own words, the BBC assigned over half of this article’s word count to uncritical amplification of statements made by political NGOs, including a link to the Amnesty International website.

“Amnesty International and Human Rights Watch have condemned the move.

“It is outrageous that a prominent human rights defender has been arrested simply for voicing his opinion online. Criticising the authorities should not be a criminal offence,” said Magdalena Mughrabi, Amnesty’s deputy Middle East director.

Amnesty said Mr Amro, the co-ordinator for Youth Against Settlements group, had posted comments on his Facebook page criticising the arrest by Palestinian security forces on Sunday of a local radio journalist who had called for the resignation of President Mahmoud Abbas.

“We have seen an alarming escalation in the Palestinian authorities’ clampdown on freedom of expression in recent months,” said Ms Mughrabi.

“Instead of continuing to step up their efforts to quash dissenting voices, the Palestinian authorities should immediately and unconditionally release Issa Amro and stop harassing and intimidating activists and others for daring to speak their minds freely.””

Readers are not told that the man portrayed as “a prominent human rights defender” is actually an anti-Israel political activist with links to the International Solidarity Movement (ISM). No information is provided concerning the agenda and activities of the non-transparently funded ‘Youth Against Settlements’ group which has in the past – along with Amro himself – been promoted in BBC reports (see ‘related articles’ below).

The absence of that background information is particularly relevant given that in the later paragraphs of this report the BBC chose to deviate from its supposed subject matter.

“Mr Amro is also currently being tried by an Israeli military court on several charges that include calling for illegal protests and obstructing the official duties of soldiers.

He has rejected the charges, which Amnesty has described as “baseless”.”

The charges against Amro also include several counts of assault, incitement and damage to property. As in any country, it is of course the role of the court – rather than a political NGO that the BBC elects to amplify – to decide whether or not those charges are “baseless”.

The final paragraph of the report is similarly gratuitous and unrelated to the story supposedly being told in this report.

“In Hebron, where Mr Amro is based, several hundred Jewish settlers live in heavily-guarded enclaves surrounded by some 200,000 Palestinians. The settlements are considered illegal under international law, though Israel disputes this.”

The Israelis living in Hebron of course do so according to the terms of the 1997 Protocol Concerning the Redeployment in Hebron which was signed by the representatives of the Palestinians within the framework of the Oslo Accords but the BBC chose to omit that all-important context from its portrayal.

With 25.7% of the word-count of this report promoting Israel-related subjects unrelated to the story it purports to tell and 52.5% devoted to repetition of statements from a political NGO, the BBC can hardly be said to have deviated from its usual policy by taking the opportunity to provide its audiences with meaningful and comprehensive reporting on what the corporation’s Jerusalem bureau chief described as a human rights issue. 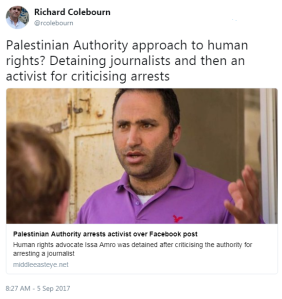