A complaint was submitted concerning the BBC's claim that Israel was 'carved out' of Palestinian land.

Last month we noted that listeners to an edition of the BBC World Service programme ‘The History Hour’ had been told by its presenter Max Pearson that: 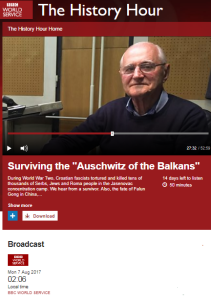 “Just the phrase ‘tension in the Middle East’ has become shorthand for referencing the decades of mistrust between Jews and Arabs following the creation of the State of Israel, carved – as it was – out of land which had belonged to the Palestinians. Giving the Jewish people of the world a homeland was supposed to be the answer to one problem but it created another.” [emphasis added]

Along with a member of the public, BBC Watch submitted a complaint regarding that inaccurate and materially misleading statement and has now received the following reply:

“Thank you for getting in touch and your complaint about an edition of History in which you claim that the presenter made a factual error when introducing a piece about the Camp David summit in 2000 which was attended by president Clinton, the then Israeli PM Ehud Barak and Palestinian leader Yaser Arafat. I forwarded your complaint to the editor of the programme Kirsty Reid. Below is her reply…

Thank you for your email.  I am sorry you feel that the edition of the History Hour that went out on August 7th, was factually incorrect against Israel.  That was certainly not our intent – and I am very sorry that you got that impression. I have listened again to the programme and can see that the assertion that Israel was ‘carved out of land which had belonged to Palestinians’ should have been worded differently. I have spoken to the presenter to make sure we are more careful with our language in future.

I hope the above allays the concerns you have raised.”

Although no action has been taken to inform those who listened to the programme that Pearson’s statement is inaccurate, the relevant episode is currently unavailable online.