An event run by a Hamas-linked group includes a speaker the BBC has consulted on ME related complaints.

Next month an organisation linked to Hamas (which is of course proscribed by the EU and in part by the UK) will hold an event titled ‘Palestine, Britain and the Balfour Declaration 100 years on’ at the British Library in London. 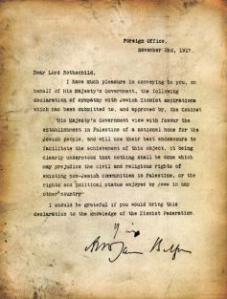 “The 1917 Balfour Declaration is widely regarded as one of the most formative and far-reaching documents in the modern history of the Middle East. It was the cornerstone of the Zionist project to transform Arab Palestine into a ‘Jewish state’. The Declaration and subsequent events changed not only the demographic map of the region but also its political, social and military configuration as well.

Join Middle East Monitor on the 7th of October at the British Library in Central London to learn more about and discuss the declaration, how it came about, it’s [sic] legal standing and consequences, and to look at Britain’s role in the continued oppression of Palestinians.”

The fact that ‘Middle East Monitor’ (MEMO) is organising such an event comes as no surprise: it is after all the Hamas-linked outfit that invited Raed Salah to the UK in 2011 and it includes among its staff seasoned anti-Israel activists such as director Daud Abdullah (also connected to the PRC) and senior editor Ibrahim Hewitt of ‘Interpal‘.

Neither is the line-up of speakers at this latest MEMO event much of an eye-opener: no-one familiar with the Hamas-sympathetic anti-Israel scene in the UK would be shocked to find names such as David Cronin, Clare Short and Peter Oborne on the list.

Nevertheless, one name on that list should raise eyebrows – not because he has unsurprisingly agreed to speak at an event run by a group known to be linked to Hamas but because the anti-Israel, anti-Zionist activist academic Avi Shlaim is also a fairly regular (but inevitably inadequately introduced) BBC contributor on Middle East affairs and has even in the past been consulted as an ‘expert’ at the later stages of the BBC complaints procedure.

Where did Jeremy Bowen learn the history of the Arab-Israeli conflict?