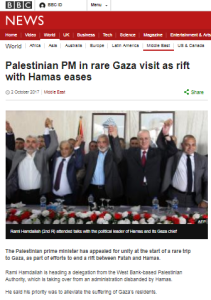 “The Palestinian prime minister has appealed for unity at the start of a rare trip to Gaza, as part of efforts to end a rift between Fatah and Hamas.

Rami Hamdallah is heading a delegation from the West Bank-based Palestinian Authority, which is taking over from an administration disbanded by Hamas.”

This is the BBC News website’s first follow-up report on the latest tentative Hamas-Fatah ‘unity deal’ since the news of Hamas’ announcement of the dissolving of its ‘administrative committee’ in the Gaza Strip broke on September 17th. In its report at the time the BBC News website told readers that:

“It is not yet clear whether Hamas is ready to place its security forces under Mr Abbas’s control – a major sticking point in the past, Associated Press reports.”

Back in 2014 when a previous (failed) ‘unity deal’ was being negotiated, the BBC similarly told its audiences that:

“…a Hamas official told the Associated Press that there were still disagreements over who should be responsible for paying civil servants in Gaza, and whether the PA’s own security forces would be allowed a significant presence in the territory.” [emphasis added]

That three year-old formula appears again in this latest article:

“Despite the rapprochement between Hamas and Fatah, a number of issues are yet to be resolved.

It is unclear to what extent Hamas will allow the PA’s forces to take over security roles, and what will happen to thousands of Hamas civil servants who have not been on the PA’s payroll for the past decade.”

Since the BBC last reported on this story in September, a senior Hamas official has made statements relating to the issue of Hamas disarmament.

“Senior Hamas leader Moussa Abu Marzouk said on Thursday that the Gaza-based terror group is not prepared to discuss the dissolution of its military wing during talks with the Fatah party, as the two sides attempt to form a unity government. […]

“This issue [of Hamas disarming] is not up for discussion, not previously and neither will it be in the future,” Abu Marzouk said in an interview with the semi-official Turkish news agency Al-Andalous. “The weapons of the resistance are for the protection of the Palestinian people, and it is inconceivable that Hamas will lay down its weapons as long as its land is occupied and its people dispersed.” […]

Despite its previous enthusiastic coverage of the prospect of a Hamas-Fatah unity government, the BBC has not since reported Abu Marzouk’s statements.

In a recent interview with Egyptian media, however, the PA president clarified that the issue of Hamas disarmament is a deal breaker.

“Palestinian Authority President Mahmoud Abbas said that he would not be prepared to accept Hamas keeping its armed forces in Gaza like Hezbollah does in Lebanon and demanded “full control” of the Strip, including over the border, security and all the ministries. […]

“I won’t accept the reproduction of the Hezbollah experience in Lebanon” in Gaza, Abbas said in an interview late Monday with the Egyptian news station CBC, pointing to an early point of conflict with Hamas, which has vowed not to turn in its arms. […]

Hamas, however, has said that it will not even broach the subject of dismantling its vast military wing during negotiations, leading some to believe the group was seeking to follow in the footsteps of the Lebanese terror group Hezbollah, which is part of the government but retains its own army.

Abbas addressed this point specifically, saying, “I won’t accept the reproduction of the Hezbollah experience of Lebanon” in Gaza. He added that just as his security forces arrest those in the West Bank with illegal arms, the same would occur in Gaza.”

Significantly, in the same interview:

“Abbas noted that Hamas is still an “Islamist group,” while Fatah is a secular party. However, he said, the terror group still constitutes a “part of the Palestinian people,” and would be included in a Palestinian government as long as it agrees to uphold the policies of the Palestine Liberation Organization, which is the largest Palestinian umbrella group. Abbas is the head of the PLO.

The PLO has recognized the State of Israel, while Hamas refuses to do so and continues to call for the Jewish state’s destruction.”

“…Hamas would not be willing to accede to the demands of the so-called Middle East Quartet — the United States, Russia, the European Union, and United Nations — that it renounce terrorism and agree to accept past agreements between Israel and the Palestinian Liberation Organization (PLO), which is the largest Palestinian political umbrella group.”

In addition, the US Middle East envoy said that:

“…there would be no dealing with a Palestinian government including Hamas unless or until the terror group recognizes Israel and renounces terrorism. […]

…Greenblatt reiterated the so-called Quartet Principles that the terror group must meet in order for a government it sits in to receive diplomatic recognition.

“The United States stresses that any Palestinian government must unambiguously and explicitly commit to nonviolence, recognition of the State of Israel, acceptance of previous agreements and obligations between the parties, and peaceful negotiations,” Greenblatt said.”

One of those “previous agreements” between the Palestinians and Israel is the 1995 Israeli-Palestinian Interim Agreement on the West Bank and the Gaza Strip. That treaty states, inter alia, in Article XIV:

“Except for the Palestinian Police and the Israeli military forces, no other armed forces shall be established or operate in the West Bank and the Gaza Strip.”

“Except for the arms, ammunition and equipment of the Palestinian Police described in Annex I, and those of the Israeli military forces, no organization, group or individual in the West Bank and the Gaza Strip shall manufacture, sell, acquire, possess, import or otherwise introduce into the West Bank or the Gaza Strip any firearms, ammunition, weapons, explosives, gunpowder or any related equipment, unless otherwise provided for in Annex I.”

In other words, the failure of a Palestinian Authority unity government to disarm all Hamas’ armed personnel (including its terrorist militia) would constitute a breach of one of those “previous agreements” – as both Mahmoud Abbas and Jason Greenblatt obviously appreciate.

The BBC’s report, however, once again failed to make any effort to enhance audience understanding of those points and – while refraining from reporting the relevant statements made by the Quartet, the PA president and the US administration – instead told readers that:

“Israel also resolutely opposes any involvement by Hamas in the PA. Along with several countries and organisations, Israel considers Hamas a terrorist group and has said it will not deal with a Palestinian government that contains Hamas members.”

Yet again the BBC’s superficial reporting on a potential Hamas-Fatah reconciliation falls far short of providing its funding public with comprehensive information needed to properly understand the story.

Dumbed down BBC reporting on the Palestinian Unity Government continues