The October 3rd edition of the BBC World Service radio programme ‘Newshour‘ included an item concerning that day’s meeting of the Palestinian cabinet in the Gaza Strip. The report (from 45:06 here) was introduced by presenter Razia Iqbal as follows: [emphasis in italics in the original] 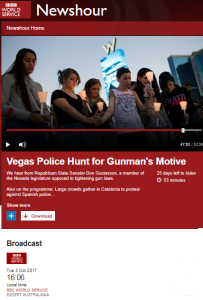 Iqbal: “The Palestinian cabinet has met in Gaza for the first time in three years as the internationally recognised Palestinian Authority moves closer to taking charge of the territory from Hamas, which has controlled it for the past decade. Last month Hamas agreed to dissolve its administration in Gaza and make way for a unity government led by the prime minister Rami Hamdallah. These Palestinians said they hoped the new government would improve the lives of the people in the Gaza Strip.”

Listeners then heard two short ‘man in the street’ interviews.

Man 1: “The youths of Gaza are living in a very difficult situation. We’re waiting for this reconciliation in the hope that there will be more job opportunities for the younger generations.”

Man 2: “We welcome them and the new government. We call on them to look at the young people – which is the most important thing – and to solve the electricity issue and the crisis in Gaza and whatever else is possible to raise the quality of life of the Palestinian people.”

Iqbal: “Let’s speak now to the BBC’s Tom Bateman who joins us live from Jerusalem. Tom; let’s pic up from what we heard from the young Palestinians there about the quality of life in Gaza. It’s a…it’s a tiny strip of land but it is a very difficult place to be, isn’t it?”

Bateman: “It’s two million people. The humanitarian situation in Gaza is dire. I mean people are dealing with electricity for two to four hours a day. There are severe water shortages as you heard there because of the electricity crisis. That means that…ah…there is a serious problem with raw sewage…ahm…and life there is extremely difficult.”

Bateman sidestepped the topic of the reasons behind the electricity crisis in Gaza, dismissing the subject as “complex”. He also failed to tell listeners why conditions in Gaza did not improve during the two weeks between the Hamas announcement that it would dissolve its managing committee in the Gaza Strip and the cabinet meeting that is the subject of his report.

“Regarding the punitive measures Abbas levied against Gaza in April in order to force Hamas to cede control of the Strip, he [Abbas] said he was in “no hurry” to lift them.

He said the measures cut 22% of the PA’s funding to Gaza — a total of $1.5 billion US dollars — which affected the already dire electricity and water situation in the Strip. These steps would not be reversed until the PA was in full control of Gaza, he said.”

Bateman: “Now the factors behind that [electricity crisis] are complex but what’s happened today in terms of this meeting of the unity cabinet – that was actually first established about three years ago – is in terms of its symbolism, in terms of what Hamas and Fatah are saying about this, is that this is, you know, paving the way for Palestinian reconciliation. However…ah…you know, we’ve been on this road before. Previous attempts at such unity have come to nothing. I think this time, you know, the backing of the Egyptians – which has been in place previously – seems to be at a level where there is some hope that this…eh…this time that unity may come to fruition in terms…it may deliver something for the people of Gaza and an end to a lot of these problems. But we’ll just have to wait and see and after the cabinet meeting today there are now due to be talks between the two sides in Egypt.”

Bateman then went on to suggest that the approach of the United States to the prospect of a Palestinian unity government is different to that of Israel:

Bateman: “Meanwhile, there is everything from some support internationally from the US but from Israel the prime minister Benjamin Netanyahu saying that, you know, he’s not prepared to accept what he called imaginary appeasement in which the Palestinians supposedly reconcile at the expense of the existence of the State of Israel.”

A statement from the US Middle East envoy put out the day before Bateman’s report made the US position clear.

“The United States on Monday said it welcomes efforts for the Palestinian Authority to resume control over government institutions in the Gaza Strip after the PA premier arrived in the Hamas-controlled enclave earlier in the day for a cabinet meeting. But it made clear there would be no dealing with a Palestinian government including Hamas unless or until the terror group recognizes Israel and renounces terrorism.

“The United States stresses that any Palestinian government must unambiguously and explicitly commit to nonviolence, recognition of the State of Israel, acceptance of previous agreements and obligations between the parties, and peaceful negotiations,” Greenblatt said.”

Using the Hebrew phrase פיוסים מדומים – fictitious reconciliations – rather than “imaginary appeasement” (which Bateman appears to have gleaned from a report by Ha’aretz), Netanyahu said:

‘“We expect anyone talking about a peace process to recognize Israel and, of course, recognize a Jewish state, and we won’t accept faux reconciliations in which the Palestinian side reconciles at the expense of our existence,” Netanyahu said during a special Likud faction meeting in the West Bank city of Ma’ale Adumim.

“We have a very straightforward attitude toward anyone who wants to effect such a reconciliation: Recognize the State of Israel, dismantle Hamas’s military wing, sever the relationship with Iran, which calls for our destruction,” he added.’

The report continued with Bateman failing to clarify to audiences why Hamas’ designation as a terrorist organisation and its continuing refusal to reject terror is a significant part of this story.

Iqbal: “I suppose we shouldn’t forget and remind people that the US and the European Union have blacklisted Hamas as a terrorist organisation which does complicate the formation of any unity government.”

Bateman: “Well this is of course one of the major issues in terms of the way that…ehm…the governance of Gaza should be dealt with because as you say…ah…it’s not just Israel but of course many countries around the world that…eh…regard Hamas as a terrorist…ahm…organisation and so you therefore have a situation where if there is reconciliation, what does that mean for the Palestinian Authority and the way it is run? Not just in Gaza but in the West Bank. I think that much will depend on these talks that are due to take place, as I say, in Cairo. And just getting through those with the many issues that have to be resolved; not least the control of arms in Gaza itself, with President Abbas suggesting…ah…that he will not accept a model where Hamas has control of arms with a sort of PA government just in charge of civilian control. Lots of issues to deal with and – as I say – you know….ah…those people hoping it may deliver something but of course the past has proven otherwise.”

Once again BBC audiences did not hear a proper explanation of why existing agreements between Israel and the Palestinians mean that Hamas must be disarmed before becoming part of any Palestinian government. As was the case in previous reports on this story, that means that audiences are not receiving the full range of information necessary for its proper understanding.