The October 12th announcement from the US State Department regarding withdrawal from UNESCO was the subject of an article that originally appeared on the BBC News website’s US & Canada and Middle East pages under the interestingly punctuated title “US quits Unesco over ‘anti-Israel bias'” and several hours later had its headline changed to “Israel to join US in quitting Unesco“. 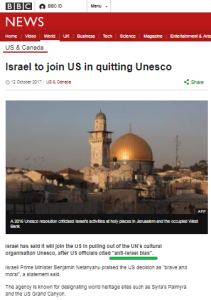 The first five versions of the article carried the original headline with versions 2 and 3 telling BBC audiences that:

“…last year, Israel suspended cooperation with Unesco after the agency adopted a controversial resolution which made no reference to Jewish ties to a key holy site in Jerusalem.”

“…earlier this year, the Israeli Prime Minister Benjamin Netanyahu condemned Unesco for declaring the Old City of Hebron in the West Bank a World Heritage site.”

The UNESCO resolution mentioned in that first paragraph was passed in October 2016 and the site warily described by the BBC as having “Jewish ties” is none other than the holiest place in Judaism – Temple Mount. BBC reporting at the time failed to provide audiences with the background information which would enable understanding of that resolution’s context: the long-standing Palestinian campaign to erase Jewish heritage and history that is part of its tactical delegitimisation of Israel.

The resolution to which the second paragraph refers was passed in July 2017 and BBC reporting at the time likewise inaccurately claimed that the Israeli prime minister had condemned UNESCO’s designation of the location as a World Heritage site when in fact Israel’s objections were rooted in UNESCO’s designation of the old city of Hebron as a ‘Palestinian’ site – and the consequent erasure of its Jewish history and heritage – rather than in any objection to conservation per se.

Only in version 4 of this article (which appeared well over two hours after its initial publication) was some clarification added to that second paragraph:

He accused Unesco of ignoring Judaism’s ancient connection to the city, which includes the crypt where its matriarchs and patriarchs are buried.”

An insert of analysis from Jonathan Marcus that was added from version 4 onward included the following: [emphasis added]

“But it is the organisation’s perceived anti-Israel bias that is the fundamental issue here. It has condemned Israel in the past for its activities in the West Bank and East Jerusalem, and earlier this year it designated the old city of Hebron a Palestinian World Heritage Site – a step Israel insisted denied centuries of Jewish history there, not least the Tomb of the Patriarchs that dates back to biblical times.”

UNESCO’s bias against Israel is of course more than just “perceived” – as recorded by UN Watch, between 2009 and 2013 inclusive:

“UN Watch has counted no less than 46 UNESCO resolutions against Israel, one on Syria, and zero on Iran, North Korea, Sudan or any other country in the world.”

UNESCO’s outgoing director general has criticised the body she headed in the past and the previous UN Secretary General admitted ‘disproportionate’ focus on Israel at the UN as a whole, as did his predecessor as far back as 2006. Earlier this year the full complement of US Senators sent a letter to the new UN head demanding an end to the “unacceptable” anti-Israel bias at that organisation and former US officials including  Susan Rice, Hillary Clinton and Samantha Power have made the exact same point. In March 2015, while speaking to the UN Human Rights Council, the then US Secretary of State John Kerry said:

“No one in this room can deny that there is an unbalanced focus on one democratic country,” he said, decrying the fact that no country other than Israel has a permanent agenda item on the council’s schedule. “The (council’s) obsession with Israel actually risks undermining the credibility of the entire organization.”

Bizarrely though, the BBC continues to put the phrase anti-Israel bias in scare quotes and to portray endemic UN bias to its audiences as “perceived”.

BBC ME correspondent: Jewish history in Hebron is a ‘view’