On October 12th the afternoon edition of the BBC World Service radio programme ‘Newshour‘ opened with an item concerning the preliminary agreement signed by Hamas and Fatah on that day. 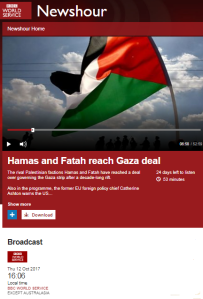 Presenter Rebecca Kesby introduced the item (from 00:45 here) with promotion of the inaccurate implication (also heard in previous editions of ‘Newshour’) that the 2006 PLC elections took place only “in Gaza” and failed to inform listeners of the full complement of countries and bodies (including the EU) that proscribe Hamas or of the violent nature of the terror group’s 2007 takeover of the Gaza Strip.

Kesby: “We begin in the Middle East because after a bitter feud lasting a full decade, rival Palestinian factions Hamas and Fatah say they’ve come to a deal over the governing of the Gaza Strip. Hamas – which is described as a terrorist organisation by both the US State Department and Israel – won a landslide victory in elections in Gaza back in 2006. The following year it wrested full control of the territory from Fatah, which controls the Palestinian National Authority in the West Bank  and relations between the two groups have been dire ever since. But with the help of Egypt, they’ve now managed to negotiate an agreement which was signed today in Cairo. A senior Fatah leader in the Gaza Strip, Zakariya al Agha, confirmed the signing of the deal.”

Listeners then heard a voice-over translation of statements made by al Agha.

Agha v/o: “We reached an agreement at dawn today regarding all the issues we had been discussing during this current round of talks in Cairo and nearly all the issues on which we had differences have been settled.”

Kesby: “Well Mr al Agha said that Palestinian citizens would see the benefits after the details had been finalised.”

Agha v/o: “All the measures under discussion should be resolved very shortly, whether they are in regards to government employees, electricity or other issues. There will be a breakthrough soon and the citizens of Gaza will feel the results of this agreement.”

With a bizarre reference to “the Middle East” – the vast majority of which would not of course be affected one iota by any reconciliation between Hamas and Fatah – Kesby went on:

Kesby: “So how might this deal change things more widely in the Middle East and will Fatah’s resumption of a partnership with Hamas help or hinder the stalled peace process with the Israelis? Joining us live on the line now is our chief international correspondent Lyse Doucet and, Lyse, first of all let’s try to get a bit more detail on exactly what has been agreed ‘cos it seems that Fatah will take over the civilian control of Gaza but Hamas it seems will keep its military wing?”

Doucet: “Well that is exactly one of the issues that we’re still waiting to hear details on. You heard the Fatah representative; he said ‘all the issues’ and then he said ‘nearly all the issues’.  Let’s go by what they have announced in Cairo; the two sides say they have agreed on. And that is that when it comes to what is essentially the only real crossing – aside from the Israeli…the heavily controlled Israeli crossings – the only exit for Hamas, the residents of the Gaza Strip with the outside world is the Rafah crossing with Egypt. By November the first Hamas’ own security…ah…security forces will have left that crossing and will be replaced by the Presidential Guards of the Palestinian Authority. In other words it will underline that there is only one security force and it is under the overall Palestinian Authority. And there was a statement to suggest that those forces would spread to other parts of the other of the edges of the Gaza Strip. We also heard that – yes, as you mentioned – the administrative control, which will be hugely important. He mentioned the electricity shortage. Gazans are living with about two to three hours of electricity a day and that is an impact noxious on Gazan homes, the hospitals don’t have enough electricity so people’s …ah…people’s health is being affected. Cars don’t have enough fuel.”

Doucet did not bother to tell listeners that the electricity crisis in the Gaza Strip is the result of deliberate Palestinian Authority sanctions on Hamas before she went on to make a curious assertion.

Doucet: “The United Nations has been urging all sides to try to end the rift and this is what we think has pushed Hamas to finally negotiate.”

Who “we” are is unclear but remarkably, Doucet erased both growing domestic dissent and the Dahlan factor from her portrayal. She continued:

Doucet: “But the question you mentioned; 25,000 men under arms in the Gaza Strip – the military wing of Hamas. President Mahmoud Abbas of the Palestinian Authority has said ‘we don’t want a Hizballah’: in other words, an independent armed group operating in Gaza. But so far we haven’t heard…in fact Hamas has said ‘we’re not going to disband our military wing but we will work more closely with the Palestinian Authority’. Will that be enough? Certainly not for Israel.”

As has been unanimously the case in BBC coverage of the latest potential Hamas-Fatah deal since the story first broke in September, Doucet refrained from telling audiences that any ‘unity government’ which avoids disarming Hamas’ terrorist militia in the Gaza Strip will fail to meet the Palestinian Authority’s commitments under existing agreements with Israel. Instead, the issue was portrayed as being about Israeli ill-will.

Apparently ignorant of the vicious violence that took place in 2007 when Hamas launched its armed take-over of the Gaza Strip and ignoring its subsequently augmented terrorism against Israeli citizens and its brutal abuse of the residents of Gaza, Rebecca Kesby went on to promote a ditsy notion unconnected to reality.

Kesby: “And so when Hamas took over the running of Gaza it did seem – didn’t it Lyse – to be crossing into the mainstream; trying to look a bit more like a legitimate political party. Is this a retreat then for them on the political process? And if so, where does that leave relations with Israel because they have been prepared to speak to Fatah but if Fatah’s now in partnership with Hamas again, does that strain relations again with the Israelis?”

Doucet: “Well I remember the elections in 2006. Fatah – and indeed the outside world, including the United States – were shocked that Hamas had won these elections and so the talk was let them bring them in to the democratic process; let them show that they can be a legitimate governing force. By the next year, however, they had completely taken over the Gaza Strip and for the last decade there has been that rift. Now since that time, Hamas has constantly been under pressure to change its founding charter which still talks about the destruction of the State of Israel. The listeners may remember that they made some changes to that charter in the last year. It was seen as a huge breakthrough by Hamas but still it fell short for Israel.”

Doucet’s claim that Hamas “made some changes to that charter” is of course inaccurate. The policy document launched in May did not replace or change the existing charter at all – as the BBC News website reported at the time. Unfortunately for BBC World Service audiences, however, this is not the first time that they have heard the falsehood now promoted by Doucet. She continued, using the partisan language of terrorist groups that call themselves ‘resistance’:

Doucet: “So there’s still a big question-mark about Gaza [sic – Hamas] whether it is a resistance movement or a governing movement. It says it is both because bear in mind that the so-called peace process is basically going nowhere. So Hamas feels why should we then give in, give up all of our rights or our bargaining positions if in fact that process is going nowhere.”

By now Doucet was obviously making it up as she went along: her attempt to persuade BBC audiences that Hamas continues to be a “resistance movement” because the peace process is stalled is obviously contradicted by the fact that Hamas has rejected any sort of engagement in that process since its founding thirty years ago. She continued:

Doucet: “And you mentioned earlier the question will this help the negotiating process? Well no, because Israel does not want to sit at the same table with Hamas and the United States in the past – and I’ve heard this from Palestinian officials – has tried to stop any reconciliation between Hamas and the Palestinian Authority. It wants them to be brought in, to stop, to end its armed wing, to change its charter, to accept the legitimacy of the State of Israel and it shows no sign of doing that yet, even though it has said it wants to basically run the Gaza Strip – wants to be part of the Palestinian Authority.”

Such requirements are of course not – as Doucet would apparently have listeners believe –capricious demands made by Israel and/or the United States: they are in fact what is known as the Quartet Principles (recognition of Israel, renunciation of violence and adherence to previous agreements) and were endorsed by the UN Security Council in 2008. Had Doucet bothered to clarify that to her listeners, their understanding of why the disarming of Hamas is such a crucial issue and why the peace process cannot progress if a new Palestinian unity government does not adhere to those principles would obviously have been enhanced.

Doucet: “It [Hamas] doesn’t…it’s not a movement like Islamic State and the other extremist groups.”

Although BBC reporting on the reconciliation in progress between Hamas and Fatah has to date been superficial and has for the most part failed to provide audiences with the information necessary for proper understanding of the issues behind the story, one might have expected that a journalist holding the title of BBC chief international correspondent would have been able to do better.

However, Doucet’s promotion of inaccurate information concerning the Hamas charter and the terror group’s approach to the peace process, along with her failure to properly explain why a Hamas-Fatah unity government which does not adhere to the Quartet Principles will stall the peace process and her often dubious analysis, failed to meet the BBC’s obligation to accurate and impartial reporting.