In part one of this post we saw how listeners to the October 8th edition of the BBC Radio Wales “religious affairs” programme ‘All Things Considered’ heard a politicised account of the Balfour Declaration that included numerous inaccuracies and omissions.

The second half of that programme (from 13:00 here) was devoted in part to ‘personal stories’ – which actually have no direct link to the stated subject matter – told by two of the three studio guests. Presenter Sarah Rowland-Jones gave the cue for Jasmine Donahaye’s story while once again portraying the Balfour Declaration as ‘controversial’.

Rowland-Jones: “…we’re discussing the Balfour Declaration in which, 100 years ago next month, the British government controversially expressed support for a Jewish homeland in Palestine. Jasmine; you researched a family link to the history of 1920s-30s Palestine. What did you discover?”

Donahaye: “Yeah I did. My mother was born in 1941 in what was then Palestine on a kibbutz. I grew up with a fairly standard sort of Zionist narrative; a very strong sense of identification with Israel as…as…as my family origin. I didn’t know anything really about the history and I still didn’t understand how it pertained directly to my family because my mother’s kibbutz had been established on land that – and this was repeatedly emphasised – land that had been legally bought; not land that had been emptied during 1948 as a result of the war. Of course when I started to examine that – and it was in relation to a passing remark by my mother – I found that in fact land sales in the 1930s were a lot more complicated and a lot more problematic in the 1920s and 1930s. Arab farmers were being put off their land, being emptied, villages were being emptied as a result of land sales and that’s precisely what happened in the case of the land upon which my mother’s kibbutz was established. It resulted in the depopulation of a village called Shatta; some 200 plus people were made landless and it was a great shock to me to discover that and all that flowed from it. So I do think that we need to look at the 1930s as well as the 1940s and I think Britain has a great deal to answer for.”

Donahaye did not tell listeners the name of her mother’s kibbutz – Beit HaShita in the Jezreel Valley – and while she claimed in this programme that “Arab farmers were being put off their land”, the account in her book “Losing Israel” makes it clear that she knows full well that the land was not owned by those tenant farmers but by an Arab landowner from Haifa. 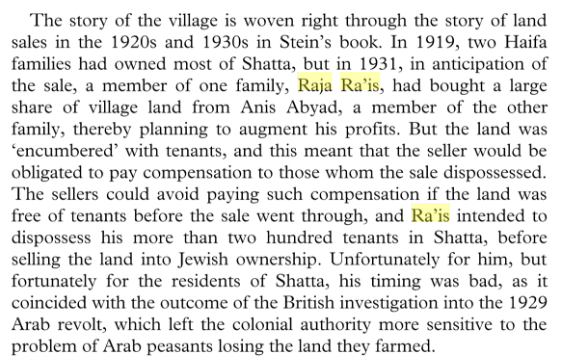 Donahaye does not however clarify that the case went to court and on April 15th 1931, the Beisan [Bet Shean] Civil Court (run under the auspices of the British mandate authority) found in favour of the landowner Raja Ra’is. The sale went through only after both tenant farmers and agricultural labourers had alternative lands to work.

In that book Donahaye’s complaints are not directed towards the Arab landowner who sold the land but at the Jews who legally bought it.

Little wonder then that in this programme BBC audiences heard an inaccurate, stylised and obviously politically motivated account of Arab farmers put off ‘their’ land and made ‘landless’ even though they were compensated and resettled elsewhere. Notably though, listeners did not hear anything on the topic of the British mandate authority’s subsequent placement of restrictions on land purchases by Jews and on Jewish immigration.

The second personal story heard by listeners to this programme came from Mones Farah, who earlier on had already described his family as being “made refugees”- according to him “as a direct result of” the Balfour Declaration .

Rowland-Jones: “And moving on to the 1940s, as we’ve referred to the State of Israel finally came into being in the aftermath of the Second World War. Mones; tell us what happened to your family.”

Farah: “I come from a village called Bir’am or Bar’am which is originally that’s my main family roots. It’s right on the borders with Lebanon. The main interesting thing about our village is during the 1917 British mandate [sic – the mandate began in 1920] there was…the whole village was almost surrounded by barbed wire either side of it because the land of the village was separated from the village itself by the British mandate [for Palestine] and the French mandate [for Lebanon].”

After describing the ancient synagogue in Bar’am and noting that at the time of his story the population were Maronite Christians (as had been the case since the 19th century), Farah continued:

Farah: “There were 1,010 people in that village and then in 1948 after the declaration of independence of the State of Israel and after our people had been included in the census of the citizens of the State of Israel, they were asked to evacuate their village with the promise that they would return within two weeks. And those two weeks have actually stretched out to this very day. […] The village wasn’t a threat to the State of Israel…

Farah did not bother to explain to listeners that the War of Independence was still ongoing at the time and that the request that the villagers evacuate Bir’am was made immediately following Operation Hiram, which aimed to break the siege on Israeli communities by the Arab Liberation Army (ALA) led by Fawzi el Kaukji that had begun six days before the operation was launched.

Most of the residents of Bir’am resettled in Jish (Gush Halav) around 9 kilometers away and would not be classified as “refugees” as Farah earlier claimed. They continue their peaceful campaign to return to their former village and – as Farah correctly stated – have won a number of court cases on that issue. However, Farah then went on to inaccurately imply that there is one sole reason why Palestinians became refugees:

Farah: “And our village is one among so many. There were about 400 villages destroyed in that time which created a huge problem of Palestinian refugees.”

Farah: “So the situation is so complex because what do you do with the return of refugees to Israel? I mean there’s a huge minefield to deal with politically. But I think the impact stays so deep within you that you actually…I think it creates something in you that says you become a weak man and so you begin to actually behave with less than the true identity that you have because you’re coming against an occupying power. In whatever way you say it, there’s control of the population and that needs to change…”

The programme then took another turn as Dan Cohn-Sherbok stated that “the Arabs never accepted the creation of a Jewish homeland or a Jewish state” and was quickly rebuked at length by Donahaye. A subsequent discussion on the question “what role do you see faith playing in all of this?” included both Cohn-Sherbok and Farah claiming that Jewish scripture can “pave the way for a sympathetic appreciation of the plight of the Palestinians” and Farah giving context-free promotion to several political NGOs, including the one with which he is associated and B’tselem.

Farah: “…the concept of the image – the B’tselem – which is the organisation B’tselem which is very important now which is not liked much by the Israeli government and the political discourse in the Israeli government because they’re seen as aggressively against the state, where the reality is that trying to keep the state accountable for some actions that actually dehumanise the others and we need to humanise the people.”

BBC Radio Wales audiences obviously learned very little about the Balfour Declaration from this largely one-sided and highly politicised discussion. They certainly heard nothing at all on the question of whether Britain lived up to the pledge it made in the Balfour Declaration or how it subsequently failed to execute the task assigned to it as administrator of the Mandate for Palestine:

“The Mandatory shall be responsible for placing the country [Palestine] under such political, administrative and economic conditions as will secure the establishment of the Jewish National Home, as laid down in the preamble, and the development of self-governing institutions, and also for safeguarding the civil and religious rights of all the inhabitants of Palestine, irrespective of race and religion.”

Instead, the aim of this programme appears to have been to steer BBC audiences towards the partisan view that – as Sarah Rowland-Jones inaccurately claimed in her introduction – the Balfour Declaration “sits behind the lasting conflict in the region”, while the relevant issue of Arab violence against Jews and later Israelis was once again whitewashed from a BBC account of history.

BBC Radio Wales on the Balfour Declaration – part one

Politicising the Balfour Declaration on BBC Radio 4 – part one