Once again the BBC muddies the waters on healthcare and electricity in the Gaza Strip.

For years the BBC has been steering its audiences towards an inaccurate understanding of the reasons for the chronic shortage of medical supplies in the Gaza Strip by promoting the false notion that Israeli counter-terrorism measures pertaining to the movement of goods and people adversely affect medical services in the territory.

For years too, the BBC has unquestioningly promoted maps, information and allegations – often inaccurate – put out by the United Nations Office for the Coordination of Humanitarian Affairs – UN OCHA – despite the less than neutral and impartial stance taken by that organisation.

It therefore did not come as much of a surprise to find quotes from and links to UN OCHA material promoted in an article published on the BBC News website on October 23rd under the headline “Gaza conjoined twins ‘need life-saving treatment abroad’“. 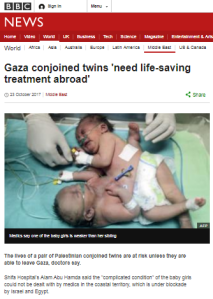 After telling the story of the conjoined twins, the report concludes:

“Israel and Egypt have maintained a land and sea blockade on Gaza for a decade in an attempt to prevent attacks by militants based there.

The restrictions, repeated cycles of armed conflict, Palestinian political divisions and budget cuts have led to a serious deterioration in the availability and quality of health services in the territory, according to the UN.

As has been noted here on numerous occasions in the past, the restrictions placed on the import of dual-use goods (i.e. items which can be used for terrorist purposes) to the Gaza Strip do not apply to medical supplies. The party responsible for medical services in the Gaza Strip is the Palestinian Authority and it is that body which has in recent months exacerbated the chronic crisis affecting  the healthcare system in Gaza by severely cutting medical aid and referrals for treatment in Israel. Likewise, it is the Palestinian Authority which is solely responsible for those “severe power shortages” in the Gaza Strip that have affected medical services as well as additional fields.

The BBC knows that full well and yet, rather than telling this straightforward story clearly and accurately, through omission and implication it continues to steer its audiences towards the inaccurate assumption that the dire state of medical services and electricity supply in Gaza is connected to Israel, using ‘reports’ produced by a partisan body as back-up.

The BBC, the Gaza Strip and medical supplies